Before we begin, a bit of self promotion. For one day only, Saturday, August 24, Amazon is dropping the price of two of my thrillers (co-written with Lynn Sholes): THE GRAIL CONSPIRACY and THE PHOENIX APOSTLES. TGC is an international bestseller, and both are previous #1 Amazon bestsellers. Download each for only $1.99. Don’t miss reading the first installment of the 4-book Cotten Stone saga (TGC) or how far one man will go to live forever (TPA). Enjoy!

Today is my lucky day. It started right after I poured my first cup of coffee and launched my e-mail. I couldn’t believe my eyes when the first message popped up. It was from an exiled Nigerian king who escaped his country 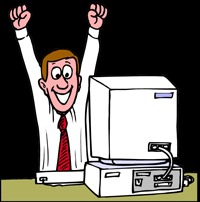 with a fortune in the bank but no way to get to it. Somehow he had found me and asked that I help him get his family’s money; and amount he estimated to be over fifty million dollars. For my assistance, he was willing to give me twenty percent of the funds: a cool ten million.

As you can imagine, I was speechless. But then things got even better. My second e-mail was from none other than the Official International Lottery (you’ve heard of it, right?). Believe it or not, my personal e-mail had been randomly chosen from among all the e-mail addresses in the world as the sole winner: a lump sum of $500k. Considering that there are hundreds of e-mail addresses out there, perhaps thousands, I felt like the luckiest guy on my block. I was whooping and hollering when my wife walked in and asked what all the excitement was about. I told her that minus some small administrative fees I needed to wire transfer to His Majesty and the lottery guys, we were rich beyond our wildest dreams.

Now I know what you’re thinking: Joe, you’re one lucky guy. You might also be thinking that all this good fortune is hard to believe. After all, winning the International Lottery is one thing, but on the same day getting this incredible opportunity to help the Nigerian king is, well, an amazing coincidence. I bet there are even a couple of you that flat-out don’t believe it could happen. You think it’s just too much of a coincidence.

If this were a novel, chances are the reader would be kicked right out of the story. That’s because coincidence, if used improperly or overused, can be considered nothing more than a cheap trick. Using it can lower the writer’s credibility and believability. And if it comes as a blatant trick to solve an unsolvable problem, it could cause the reader to close the book and move on.

Coincidence is defined as something that happens by chance, was never intended to take place, and is usually considered an accident. Improper use often occurs when a writer paints himself into a corner and there’s no way out except to turn to an unbelievable event or the introduction of a new element “out of the blue”.

Don’t get me wrong, coincidence is a legitimate writing technique if it’s properly setup and foreshadowed. The key is to make it realistic. Example: on a given day, running into someone you know at JFK is not realistic. Considering an international airport like JFK has multiple terminals, dozens of airlines, and hundreds of thousands of passengers passing through it daily. How often have you run into someone you know at a big airport like JFK? Not too often, I’ll bet. If it doesn’t happen to you, why should it happen to a character in your story? It’s not realistic.

But let’s say two people are in the same industry. Each year they attend an industry tradeshow. They always stay at the same hotel. You’ve established this somewhere previously in the story. What are the chances of them running into each other in the hotel bar? Pretty good. That’s a realistic coincidence. You’ve already foreshadowed enough information to the reader that when it happens, the reaction is Aha, not No Way.

The secret to using coincidence is to narrow down the chances of it not happening beforehand so that when the event takes place, you don’t make the reader roll her eyes.

A nasty form of coincidence is what’s called deus ex machine, Latin for god in the machine: a seemingly inextricable problem is suddenly and abruptly solved with the contrived and unexpected intervention of some new character, ability or object. Your character suddenly has the ability to fly a jumbo jet without any prior flying experience, or a new character appears just in time to perform a life-saving rescue, someone that up until this point was never mentioned in the story. Don’t go there. It will make your writing weak and lacking in integrity. And it could cost you readers.

So how do you avoid coincidence and deus ex machine? Plan ahead. Take time to foreshadow so your reader doesn’t get blindsided. Map out the story in advance, drop hints, and keep things realistic. And as a last resort, if you must use coincidence, take the time to go back and insert the foreshadowing and hints. Doing so will make you look clever in the eyes of the reader. Lastly, placing your character into hot water by coincidence is forgivable. Getting her out is not.

BTW, one more thing about my fabulous luck with the Nigerian king and the International lottery: according to stats, U.S. citizens lose more than $550 million a year as a result of Internet fraud. I sure hope His Majesty isn’t trying to put one over on me.

28 thoughts on “Keeping it Real”