The first chapter is the hardest – at least for me.
In one page, I have to catch the reader’s attention, set the scene, and introduce the main characters.
But I can’t overdo it. Too many characters, and my first chapter has “crowded room syndrome.” The plot can’t move forward and readers lose track of everyone. Also, a mystery has to pass the three-second test: That’s how long bookstore customers supposedly linger over the first page before they decide to buy it or put it back.
I’ll spare you the whining, pacing, and time wasting it took to start “Board Stiff,” my new Dead-End Job hardcover. Here’s the condensed version.

“Board Stiff” is the ultimate beach book. 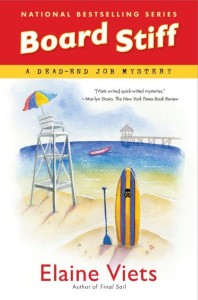 I wrote about the cutthroat competition for tourist dollars on Florida beaches. I was inspired by a newspaper story about companies that rented paddleboards, surf boards and other beach toys and sabotaged their competitors. In my book, sabotage naturally became murder.
Standup paddleboarding is the hot sport. 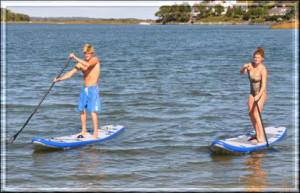 In “Board Stiff,” Sunny Jim Sundusky believes someone is destroying his paddleboard rental business.
I started the chapter with this quote:
“They’re trying to kill me,” Sunny Jim Sundusky said. “They nearly succeeded in March, but I’m a tough old buzzard. I survived. They almost got me in April, but I escaped again.”     That’s a grabber, I decided. But who’s Sunny Jim talking to? And why? Most important, where are they? Some novels have snappy openings, but leave the characters floating in space for pages. I made sure Sunny Jim was securely grounded in the second paragraph:
Helen Hawthorne and her husband, Phil Sagemont, sat across from Sunny Jim in their black-and-chrome chairs in the Coronado Investigations office. Sunny Jim sat in the yellow client chair, looking anything but sunny.     Now I’d introduced the three principals: Private eyes Helen and Phil, and this Sunny Jim character.
The Dead-End Job mysteries are told from Helen’s point of view. Here’s her take on Sunny Jim:
Sun-dried was more like it, Helen thought, as she studied him. His face was red leather. His blond hair was dyed and flash-fried in a crinkly permanent. But he did look tough. 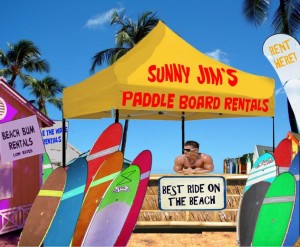 Helen has more to say more about Sunny Jim’s looks, but I needed to get on with the story. Why is he in their office?
“They’re gonna keep coming after me until they stop me for good,” he said. “That’s why I wanna hire you two. I hear you’re the best private eyes in South Florida.”     I let Sunny Jim say the couple is the best in South Florida – and also pin the chapter to a place on the map.
The response is typical Helen and Phil, and reveals something about the PI pair. Phil knows they’re the best detective agency in South Florida. He takes Jim’s praise as his due. Helen is more modest.
“We were lucky to get good publicity,” Helen said.
“That wasn’t luck,” Phil said. “That was good detecting.”
“That’s what I need,” Sunny Jim said. “Detecting. I want you to stop them before they  stop me – permanently.”      Helen is the observant one. She watches Sunny Jim while he talks, and gives us a better picture of their potential client.
He stabbed his chest with a brown callused hand, right in the smiling sun on his yellow SUNNY JIM’S STAND-UP PADDLEBOARD RENTAL T-shirt. His arms and legs were roped with muscle and his chest was a solid slab.
Helen had seen enough steroid hardbodies to know that Jim built that beef the old-fashioned way. She thought he was attractive in a dated disco style, except he was too young to have caught the seventies’ disco fever. She guessed his age on the shady side of thirty-five.     My novel’s first page ends with Sunny Jim’s demand for action:
“So, you gonna save my business or not?” Jim’s eyes were hidden behind expensive shades – Floridians rarely had naked eyes – but his chin jutted in a challenge.
I patted myself on the back and kept on writing. 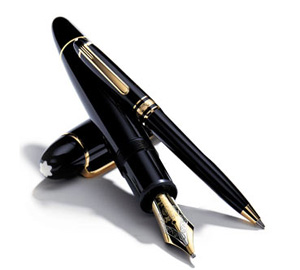 19 thoughts on “The First Step Is the Hardest: Writing Chapter 1”