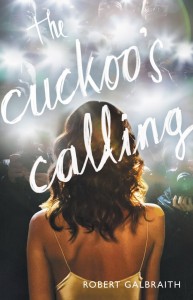 It was revealed this week that a mystery novel titled The Cuckoo’s Calling and written by Robert Galbraith was in fact authored by someone named J.K. Rowling, whose name in the author’s slot on a book has been enough to cause children and their parents to line up in front of bookstores at midnight. The news leaked as the result of a Twitter tweet and spread very quickly. After the dust settled and the smoke cleared a book which had sold a few hundred copies since its publication in late April 2013 suddenly became very much in demand. Rowling, her publicist, and any number of people were accused of having leaked the true identity of the author to the world in an effort to boost sales of the book. It was revealed yesterday, however, that the cause of the leak was an attorney in the employ of the law firm which handles Rowling’s literary business. As an attorney myself, I’m embarrassed.

One of the things that is drummed into young skulls full of mush in law school, and thereafter in countless continuing legal education courses, is something called “client confidentiality.” Most people are familiar with the concept, at least in passing. It’s simple enough: if you tell your attorney something they take it to their grave. Believe me, attorneys hear some very interesting things. Not all of us represent someone on the order of J.K. Rowling, but there are any number of times that someone has told me something within ten minutes after sitting down in front of me that they’ve never told anyone else. What I’m told often comes under the heading of “too much information,” and occasionally I pray for selective amnesia, but that’s the way it goes.  Whatever I’m told,  however, stops with me, even in general terms. For but one example: if one practices family law and the next door neighbor comes to the office to discuss a possible divorce action, one does not go home and tell their spouse, “Guess who came in and talked to me today!” and give the spouse five guesses where the first six don’t count, all the while gesturing toward the house next door. The confidentiality, by the way, belongs to the client; to continue with the example, if the next door neighbor wants to tell the world who they consulted about a divorce, and what was discussed, that is their privilege. It doesn’t release the attorney, however, from the obligation of client confidentiality. Only the client can do that at their discretion and pleasure. Client confidentiality obtains in the state where I practice whether the prospective client ultimately retains the attorney or not. The “give me a dollar and I can’t discuss this with anyone else” is a great device to build suspense in a book, but it doesn’t apply in the real world. This makes sense. A prospective client has to be able to speak freely — spill their guts, as it were — so that the attorney can properly evaluate the case, make recommendations, and decide whether to represent the individual or recommend that they go elsewhere.

In Rowling’s case, the firm handling her legal matters with respect to her publishing — Russells — issued a terse though ultimately self-serving statement to the effect that Chris Gossage, a firm partner, had disclosed the information about Galbraith’s true identity to his “wife’s best friend” who ultimately tweeted her newly found knowledge to the world. Russells additionally stated that Gossage had made the disclosure “in confidence to someone he trusted implicitly.” This is a round-about way of assuming responsibility but not taking blame. It’s nonsense. An attorney receiving knowledge in confidence cannot subsequently disclose that knowledge to a third party in confidence. The information stops within the confines of the four walls of the office.

Rowling I am sure had her reasons for  wishing to preserve her anonymity with respect to her authorship of The Cuckoo’s Calling. I don’t know what they might have been, and though I’m curious, it ultimately makes no difference. She doesn’t even need a reason. If you make a disclosure to your attorney the walls go up. That increase in sales of The Cuckoo’s Calling which occurred after Rowling’s confidentiality was breached is irrelevant. My gut instinct is that Rowling would have been much happier if the sales of the book had remained where they were and the secret of her identity had been preserved.

I’m unhappy about this, for so many reasons. So please. Make me laugh. Tell me the best lawyer joke you know.