Note: We’re starting an occasional feature on Fridays called TKZ Spotlight, where we profile various members of the TKZ community. We’re kicking things off today by profiling Basil Sands, a thriller author and long-time TKZer. We love the way Basil keeps things lively around here with his creative observations in the Comments!

You can link to Basil’s books here. 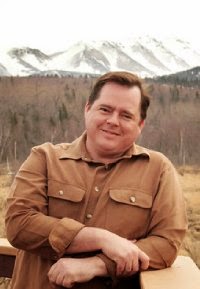 BIO: Basil started out writing thrillers for podcast-audio serials that gradually developed into four novels, a novella, more than a dozen shorts, and many more to come . He’s also an audiobook narrator and has recorded for several best selling authors including many right here on The Kill Zone Blog, where he’s been a regular commenter since near the beginning in 2008.

Born in rural Alaska and raised among the Ohio cornfields, he longed for excitement. After injuries ended a stint in the Marines he worked as a restaurant manager culminating in a three year contract at the National Security Agency (Chef to the Spies). He’s also owned a computer shop, was a carpenter, farmer, actor, lumberjack, voice actor, Wilderness Rescue EMT, computer network admin, hotel maid, tire change mechanic, IT guy, Scoutmaster, college instructor, dynamite packer, talk show host, and youth minister. After 9/11 he spent three years as a sergeant in the Alaska State Defense Force Coastal Scouts and was recognized as Alaska Soldier of the Year in 2003.

Until a ski injury he’d been an avid weight lifter benching 420 lbs at age 40. Now he’s limited to a bit on the bike and a long walk each day…that and curling the occasional pint of Guinness…to work out the arthritic kinks.

He lives in Anchorage Alaska with his wife and sons.

Where do you live, and how does that setting (or another one you use) inform your writing?

As an adult I’ve lived in Alaska for nearly twenty years; three of my books, including my WIP, take place here. Describing something as majestic as Alaska sounds a lot different when you’re in it as opposed to interpreting it via Google Earth. There are many wild experiences in the Arctic that most people can’t fathom. For instance, at -40 F boiling water tossed into the air makes an audible“zziiip” as it freezes into perfectly round BBs before it hits the ground.

How does your background influence your writing?

As a child I spent more time in my imagination than any other place.  I escaped the drudgery of life into my own world, one that I could shape. I read encyclopedias for fun then I’d recreate the drama of history with my little green army men, or run with my dog through the woods. We were Daniel Boone and his pet wolf, or secret agents searching for Nazi spies amongst farms and secret hay fields.

From the bio above you can glean that I’m sort of a ‘Jack of All Trades’ as the saying goes or maybe more like a ‘Basil of A Lot of Jobs’. Those various experiences, jobs, and locations have given me a general hands on perspective to a lot of topics.

How old were you when you first felt the urge to write, and what inspired you to get serious about honing the craft?

Creating stories has been a part of my life for as long as I can remember. By the time I reached my teens I was performing in theater and choir, and dabbled in stand-up comedy. In my twenties I started writing my own one man plays about historical and biblical characters to perform before church youth audiences.

In 2006, at thirty eight years old, I found myself in an incomprehensibly boring IT job that involved lots of staring out the window like a Techno-Maytag-Repairman. Within weeks I was ready to staple my lips shut to stop me from babbling. Then one day a story popped into my mind while I sat there watching stuff not break. It developed into a script for a podcast audio-serial, then into a full fledged novel. Since that first one, I’ve known that I have to write these stories, and do it well.

What are some main themes you return to when writing?

Your goals in life?

My life goals are simple. Love my wife and kids, and serve my God.

My writing goal is not so simple. There’s a story I’ve been brewing for 25 years, but know that I cannot put it onto paper until I really know how to write well. The stories I’m writing now are merely practice for that life’s work.

Which authors have most influenced your writing?

Louis L’Amour, Ken Follet, Fred Forsyth, Bernard Cornwell and Jack Higgins are the ones I’d list as most influential. But before I knew them, the initial fire was lit by George Remi (Herge) author of the Tintin comics.

Do you have a “day job”? Tell us about that. Does it inform your writing?

I am a Senior IT Specialist for the Dept of Veterans Affairs. It is the same one that I once described as “excruciatingly boring”, but I learned a few years back that when the government tacks ‘Senior’in front of your title and gives you 3 or 4 grade increases the boredom decreases exponentially.

My knowledge of what can and cannot be done with technology is very useful stuff. Additionally I sometimes overhear conversations or read the records of veteran’s experiences that have blown my mind, from Medal of Honor winners to some real life Jason Bourne types.

What are you working on now?

My current WIP is a somewhat ambitious novel for me, the first of what I expect to be a three book series about an invasion of America, seen through the eyes of a family separated in the initial attack. The teen sons are at boy scout camp, the father is driving home anticipating a romantic night with his wife when their world is ripped apart. The husband has to make a choice, rescue his kids or his wife. The kids know how to survive in the woods, and have adults leading them, many of whom are combat veterans. He chooses to find his wife first, only to discover her bullet riddled car containing what he believes is her mangled body. Unknown to him, she has been taken prisoner by the invader’s commanding general. While her husband and sons become guerrillas in separate ventures, the wife witnesses behind the scenes the efforts the general makes to capture and kill them. She will do anything to protect them.

The story is full of action, violence, romance and of course the scenery of Alaska.