On a cool April night in 1950, a young actor got the chance to do a scene in the Actors Studio, in front of the legendary Lee Strasberg. This was the Valhalla of all up-and-coming actors in New York. It wasn’t easy to get a scene here, let alone be invited to join.
The scene called for this young actor to portray a soldier dying of gangrene. When the actor finished, Strasberg told him he had not sufficiently portrayed the pain of someone dying of this condition.
The actor interrupted him. He said that he, Strasberg, was the one who was misinformed. You see, this actor had been a Marine in combat during World War II, and had seen soldiers dying of gangrene. He knew that in the final stages they felt no pain at all.
Furious at being contradicted in front of the class, Strasberg told the actor to leave and never return. The actor responded with a two-word exit line before storming off.
The young actor’s name was Lee Marvin. 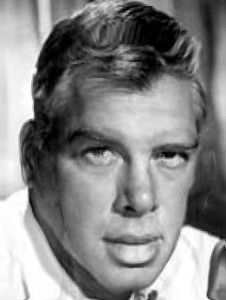 Marvin would ever after infuse his acting jobs with whatever truth was inside him. And what was inside him was a volcano.
Growing up, Marvin had ADD and dyslexia in a time when no one really knew how to deal with them. More discipline was the only prescription. No wonder Marvin hated school and was constantly in trouble. He was always fighting. Once, as a teenager in a boarding school his parents desperately tried, his roommate threw some trash out the window. Marvin told him that was a stupid thing to do. The roommate called him a son of a bitch. Marvin later recalled, “I said, ‘Call me that again and I’ll throw you out the window.’ He called me it again and I threw him out the window. So, they kicked me out of school.”
With fighting such a constant in his life, it was no surprise when, at age seventeen, just after the attack on Pearl Harbor, Lee Marvin joined the Marines.
After Boot Camp and training, he shipped out for action in the South Pacific. What he saw there was not the glory often depicted in the movies. He saw life-altering horror. He was a sniper with many kills. He also saw hand-to-hand combat, wiped out machine gun nests, and was almost killed on several occasions. Once, a Japanese soldier came at his face with a bayonet. Marvin took it away and bayoneted the soldier “all the way to the gun barrel . . .”
A climactic battle in Saipan resulted in 80% casualties in Marvin’s unit. Marvin was wounded and ended up in a hospital. He was 21 years old.
And from then on dealt with PTSD, alcoholism, and a four-pack-a-day cigarette habit.
But American men of that era were expected to “soldier on” in life, and that’s what Marvin did. Like so many returning vets he had a hard go finding what work to do. He spent time digging ditches and hand-threading pipes. And drinking.
Then one morning in 1946, Marvin was sleeping off a drunk in a public park in Woodstock, NY. A Red Cross nurse woke him up and started talking about community service. Next thing he knew he was involved in a local Red Cross benefit at the town hall, a production entitled (appropriately) “Ten Nights in a Barroom.”
He got the acting bug. He did what most actors did in those days, pounded the pavement in New York. He got some work, told Lee Strasberg off, and later headed to Hollywood where he heard there was money. He started landing small roles, and turned up on an early Dragnet episode. Jack Webb, star and producer of the cop show, was so impressed with Marvin’s performance that he made sure influential people around town saw it.
Marvin’s breakout role was Vince Stone, a mob strong arm in Fritz Lang’s The Big Heat (1953). In a chilling moment that made movie history, Vince gets mad at his girlfriend, played by Gloria Grahame. She’s been yapping to a cop. He throws a pot of scalding coffee in her face, scarring her.  No wonder Marvin became a steady movie heavy after that. 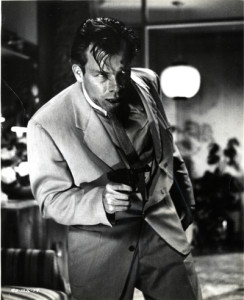 To expand his image, Marvin starred in a late 50s TV cop series, M Squad. The money was good but he never took to the small box. Later he said, “Creatively, an actor is limited in TV. The medium is great for pushing goods. Sell the product, that’s the goal. . . But, I’m not interested in pushing the products; I’m interested in Lee Marvin, and where he’s going as an actor.”
We writers need to ask ourselves the same thing. Are we just trying to push a product, or do we have somewhere we want to go as a writer? Are we playing it safe? Or is there a truth we have that is burning to get out?
When Marvin was cast as the drunken gunfighter in Cat Ballou (1965), no one thought the movie or the role would do that much. But it became a surprise hit, and Marvin’s hilarious performance (given reality by his own struggle with the bottle) ended up winning him an Academy Award for Best Actor of the Year. 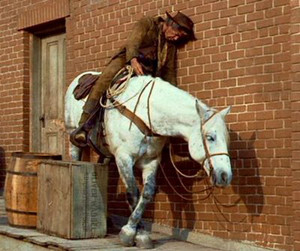 And that, in turn, rocketed Marvin into a star status he never gave up. Next came some iconic roles, including the tough major in The Dirty Dozen, and the remorseless thief bent on revenge in Point Blank. 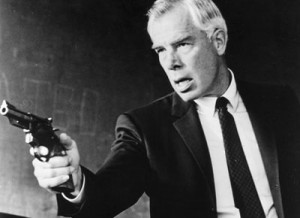 But I think my favorite Marvin performance is in the under appreciated Western, Monte Walsh (1970). It’s an elegiac tribute to a cowboy in the fading West who refuses to give in. In a way, it sums up what the actor was all about. There’s a point in the film when Walsh is offered a part in a Wild West show, but he’d have to dress up in gaudy duds and put on a false front. Despite the money, despite the comfort, despite the security this would offer him, he refuses, saying, “I ain’t spittin’ on my whole life.” 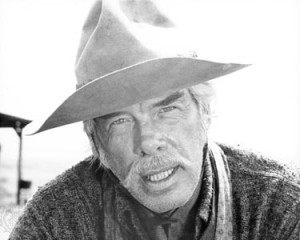 Which assumes you have a life to be spat upon. A life lived with purpose and a truth you will stand up for.

When you can get that into your art—acting, fiction, painting, song, dance—you are leaving behind something more than product-pushing. You have a chance to carve out a unique and, perhaps, unforgettable place in your chosen field. Like Lee Marvin.
So what about you? Do you want to dress up in gaudy duds? Or do you want to be an artist with something to say?
***
Details in this article based in large part on the new Marvin biography by Dwayne Epstein, Lee Marvin: Point Blank (2013, Schaffner Press)

22 thoughts on “Write Your Truth”