Do you feel safe? By that I mean do you feel “safe” in a general sense, in your home, neighborhood, and workplace?
I’ve never had much of a sense of safety–which is odd, because I’ve never been a victim of any notable crime. Recently I’ve been feeling particularly vulnerable; I’m not sure why. For example, when my family and I stopped at a fast food restaurant just after midnight recently, I kept one eye on the entry and exit doors the whole time, just in case an armed robber decided to make a late-night run for cash. And yesterday when I was leaving the local mall, I checked first for loiterers, to make sure I wasn’t being followed to my car.
Where does this hyper-awareness come from? It could be the news. There’s been a lot going on lately. Locally we’ve had several armed robberies take place in mall parking lots. A couple of teenagers were stabbed inside another mall, one that had previously felt “safe” to local parents. Plus there’s been a spate of home invasion robberies. Nowadays whenever I answer the door I make sure the person on the other side is aware of MacGregor, my 80-pound Belgian Shepherd-Lab mix. (Sure, Mac is smiling in this photo, but you should see him when his hackles go up!) 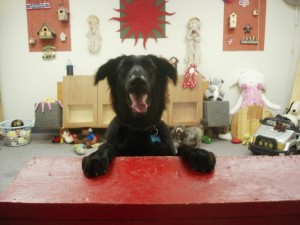 Am I being excessive? Is this caution the result of prudence, or paranoia? Studies have shown a disconnect between perception and the actual crime rate, according to experts. But that argument doesn’t hold water with the voice inside my head, the one that logs the nearest exit every time I enter a public space.
I’ve gotten used to the characters in our books having a sense of situational awareness, but it’s disturbing to have one’s personal space invaded.
Maybe somehow all this preparation will pay off. Yesterday we had a terrible bus wreck in our area. The bus evidently lost its brakes and careened down a mountain road until it smashed into a couple of vehicles coming the other way. My husband suggested that the accident was unavoidable, that “destiny” might have been responsible for some of the loss of life.
Nonsense, I replied. If the bus driver had downshifted instead of riding the brakes, and if he’d driven the bus into the inside of the mountain instead of trying to stay on the road,  more people might have lived.
My husband stared at me.
“Who has time to think of all that during an accident?” he asked.
“I do, every time I go down that mountain,” I said.
It’s that voice again. I actually don’t mind it too much, because it’s that voice that helps me conjure up scenes in my writing. What’s the worst thing that can happen, and what does this character do?
That’s what we writers do all day, right? We think about these things.
The problem is shutting it off when the writing is done.
0

27 thoughts on “Situational awareness, or paranoia?”