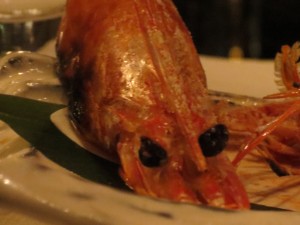 Our stay in Hong Kong and Taipei has been wonderful (We didn’t end up going to mainland China, because the jittery authorities there denied one of our party a visa);  my attempts to absorb the local flavor including the cuisine, however, met an abrupt and decisive defeat.

On the final day of the stay we were treated to lavish meals including pigeon, fungus, sea cucumber, soup with the innards of some unspecified creature, duck feet (they might actually have been goose feet, they were so large), plus a dessert of curdled whey with mango chunks, which looked like something an orangutan might have yarped up. I tried to sample everything to avoid insulting my hosts. Three hours later, I was doing my own share of yarping back in the hotel bathroom.  By the time this post is published I’ll be in the air on the way back to Los Angeles– if I make it past the airport health monitors in Hong Kong, that is. In Asia they come at you wearing masks and waving handheld thermometers as you walk past cameras that show you in infrared.  I’m afraid they might mistake me and my husband, who is also sick, for a pair of Patient Zeroes. If we do get quarantined, at least it’ll be fodder for a story.

Either way I’ll be out of pocket on tuesday, so I’ll leave you with a question–what’s your favorite medical malady thriller of all time? Mine have got to be COMA and THE ANDROMEDA STRAIN. I’ll never forget that image of the human bodies suspended from wires.

See you all stateside!