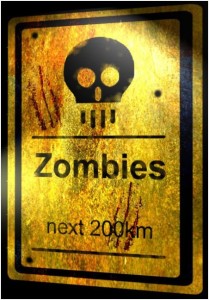 I’ve been reading a lot of Zombie books lately, and I’m not truly remorseful. A guilty pleasure. There are so many, and so many authors writing in that horror sub-genre write great books indeed. Damn it, people just like Zombie hoards. It seems to me that before NIGHT OF THE LIVING DEAD, Zombies were unfortunate people brought back to life by a Voodooie priest to become a slave of some sort. Usually there was a secretish herby drug involved that accomplished this and (supposedly) there have been actual cases of Caribbean-based people who were once dead, and had no memory of their prior existence. Whatever. But the point is (as far as I know) they didn’t spend their time above ground, looking to eat flesh and brains until John Carpenter’s low-budget Chittlin’ yard party outside the old farmhouse near Pittsburgh.

James Scott Bell’s Zombie lawyer, Mallory, breaks the mold, and it’s an hilarious book. A Vampire’s trial held at night is a hoot I know he thought his book through, and made his zombie more realistic than most authors writing about Zombies. But his book is comedy and not horror so much.

Each Zombie book, like the Vampire ones, is different but shares certain similarities. There are lots and lots, but I’ll list a few.

2) The physical sharing Zombie Juice, or the airborne Zumbo-dust that covers the world, makes you become one upon dying

3) Being Zombified cuts IQ toward single digits. They can move around mostly in a shuffle, but can’t open doors, or use ladders, although steps are not a problem.

In some of these books Zombies learn tricks like opening doors and even setting up ambushes.

4) only opening the skull and scattering brains stops the things. They can see other Zombies get their brains scattered but (in denial like living people) do not think it can happen to them.

7) They can walk if they have retained their legs, or crawl if legless, but wheelchairs are too complex to operate. If immobile, a zombie head can lie waiting like a rock until an ankle or a finger finds its way into its mouth.

8) All they think about is eating flesh and or brains

9) They have a keen sense of smell, see and hear well above the average living human

10) They often repeat old habits like going home to eat their friends and family, or go to the mall

11) The children zombies are usually faster moving than the adults

12) They coexist peacefully until preying

So this got me to thinking about how much disbelief I should suspend. I was asking a Chiropractor the other day how if tissue and muscle was rotting normally, how long could a Zombie walk around before critical disconnection and failure of the ability to locomote. If they can “live” just fine for years without eating, why do they go to so much trouble trying to eat something they can’t digest or pass? He said, “None of it is possible.” He wasn’t willing to theorize. I can believe all of it in a well-written story, but I do have questions galore that I often wonder how the writer can deal with. Bodies decay to bones, which are connected by living tissue and not even a reanimated brain can make tissue regenerate.

I think people are so into Zombie books because it appears society could degenerate and the institutions that keep us safe, break down. When anarchy is the norm, the strong will try to subjugate the weaker members of the non-society. I suppose that is a big factor in the surge of popularity. Plus, I think people just like seeing Zombies get it, more than they do ghouls or politicians.

What’s your guilty pleasure in novels?

10 thoughts on “The Zombification of Miller”