How did you get started writing mysteries or thrillers? Assuming you were an avid reader of the genre, did you outline the plots of your favorite stories? Study structure and pacing? Attend writing workshops by seasoned authors? Or did you use a how-to book?
Keeper of the Rings, my fourth sci fi romance now available in digital format, is the story wherein I learned how to plot a murder mystery. It has all the elements for a cozy: a limited number of suspects, most of whom know each other and who have a motive for the crime, a confined setting, and an amateur sleuth.
Here’s the story blurb:

Taurin is shrouded in black when Leena first meets him, his face shaded like the night. At first she believes him to be a simple farmer, but the man exhibits skills worthy of a warrior. With his commanding presence, he’s an obvious choice to be the lovely archaeologist’s protector on her quest for a stolen sacred artifact. Curious about his mysterious background, and increasingly tempted by his tantalizing touch, Leena prays their perilous journey will be a success. She must find the missing relic, or dangerous secrets will be revealed that may forever change her world. 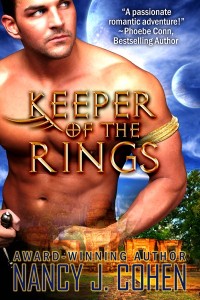 Who stole the sacred horn that must be blown to reset the annual cycles of Lothar, the god worshipped by the people of Xan? Only the members of the ruling priesthood, the Synod, had access to the holy artifact. Was it Zeroun, the ambitious Minister of Religion? Perhaps Karayan, a friend of Leena’s family and the Minister of Justice, is involved. Or maybe Sirvat is guilty. As Minister of Finance, she has something to hide. So does everyone on this twelve person council, including the Arch Nome himself.

While Leena’s brother is assigned the task of investigating the Synod members, her mission is to retrieve the artifact. Here the story becomes Indiana Jones meets Star Wars. Leena and Taurin survive one peril after another on a desperate quest that takes them around the globe and deep underground beneath the ruins of a holy temple. Do they find the horn before disaster ensues? Is the thief unmasked? Was he responsible for the accident that killed Leena’s mother?

Here’s an excerpt where Leena and Taurin discuss the suspects with her brother, Bendyk, and his assistant, Swill.

Swill tugged at the long sleeves of her burgundy blouse, tucked into a black skirt that hugged her hips. “Magar makes regular unexplained entries in his receipts, which Sirvat deposits into the Treasury. Magar refuses to elaborate on the source. Sirvat’s financial records are impeccable, but the odd thing about her is these trips she takes every so often, returning with a new piece of jewelry each time. The items are created with rare gemstones. Usually, she’s not one to adorn herself.”

“I’ll bet I know where she gets them.” Taurin related what he and Leena had learned about Grotus and Sirvat’s relationship.

“I don’t believe it.” Bendyk shook his head. “She seems so strait-laced.”

Leena gave a small smile. “Perhaps she hides a passionate nature. She certainly has a peculiar bent to fall for a man like Grotus.” Her face grimaced in disgust at the memory of the smuggler. “You know, some of those items I saw in Grotus’s mansion are similar to pieces in Karayan’s house.” She pursed her lips in thought. “Karayan has quite an extensive art collection.”

“Are you implying that he buys his art works from Grotus?” Bendyk asked with a horrified expression.

“Not really. They just share the same kind of artistic taste, although Karayan is a much better dresser.”

Beside her, Taurin snorted. “We’re not here to discuss anyone’s preference in art or clothes. Did you investigate Zeroun? As Minister of Religion, his department is responsible for administering the Black Lands. Someone there has granted the Chocola Company illegal rights.”

“We’ll check into it,” Swill assured him. “We’ve cleared most of the other Synod members but weren’t sure about Sirvat’s trips and Magar’s secretive dealings in his trade commissions. I still feel he’s withholding information from us.”

“You’re wasting your time with Magar,” Taurin snapped. “I suggest you check out Zeroun. The Minister of Religion would also be responsible for—” He held his tongue; he’d nearly said for excising any records of the Temple of Light. “—for the Black Lands,” he finished.

*****
They could easily be discussing suspects in a murder. This was the last romance I wrote before switching to mysteries, but it taught me everything I need to know about plotting a whodunit. How did you learn the craft?

20 thoughts on “Your First Mystery”