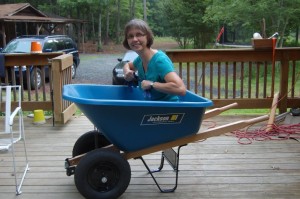 I truly believe that I would not have achieved anything I consider worthwhile in this life without my wife, Susan. I have never loved anyone or anything with the sincerity and intensity that I feel for her. She had a birthday on the 20th of May. I bought her this set of very expensive wheels, which she looks great in. She looks great in anything.

I know it’s like giving pots and pans for Mother’s Day, but wait… Here was my thinking. We have a large place. A small house, but a large garden, which is hers entirely, and she likes to move things like wood, stones, dirt, mulch, and other heavy things around on the property. We have a regular wheelbarrow with one wheel, which is hard to hold straight when its loaded. I have a five-horsepower motorized wheelbarrow that carts 1,000 lbs and dumps its load, but Susan has a hard time cranking it. I have to start it. This is a wheelbarrow that will allow her the independence to do more of what she enjoys without needing anyone’s help.

Susan is the most unselfish person I have ever known. She wants everything for others and only what she needs for herself. She has never once expressed any doubts that I would succeed at whatever I attempted. And she worked a job, made the meals, and raised my children while I sat in our bedroom day after day for several years typing. She never got discouraged as the 161 rejections stacked up, because she liked my manuscripts and honestly believed I would sell a book and then several more, which I did. My biggest regret is that she is still working while I sit and type day after day. I always wanted to give her the best the world has to offer, but she has always been satisfied with simple things. I have heard her say more than a few times, that our life together has been a lot of things, but never dull.

I know that if it were not for her I never would have found the author in me. And I would never have been happy, which I truly am. Every good female character I write is mostly made up of Susan, so strong, independent women are easy for me to write. Knowing how hard she works is what drives me to work as hard as I can. The world disappoints, but she never does.

My youngest son is getting married on June 4th and I have not been writing at all for the past few weeks. I’ve got too much on my plate to think about any story but our own. I hope each of you has a muse, an inspiration, and a reason to sit day after day and pound out your soul and take the blows we all have to take.