Note: Sorry I’m posting late today. My neck of the woods got hit by an Internet gremlin, so I had to repair to a local java joint to get connected. 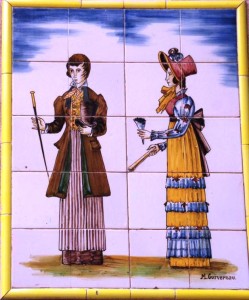 I blocked my first person on Facebook this week. I didn’t know the man–I blocked him because he made unpleasant comments about a news article (something to the effect that it would be good if the entire state of California got radiation-fried and burnt off the continent). I decided I didn’t want to read any more comments by him. Ever.

I gave the guy a fair hearing before blocking him, though. I read his profile carefully–the things he’d posted there made me decide that the nuking California comment wasn’t a misguided attempt at humor or a momentary  lapse in judgment. It was his actual point of view.

That’s the interesting thing about Facebook–there’s always a real person attached to postings. Unlike other social media forums, where people lurk and flame behind pseudonyms such as RatBoytheTerrible, Facebook lets you interact with people by their real names. There’s a certain accountability, therefore, to most of the discussions. In general people’s behavior on Facebook (at least in my age and social group) reflects a certain politeness and social sensibility. It’s like attending a friend’s party–no one wants to be the boor who has too much to drink, starts ranting about politics, and has to have his conversation keys taken away.

I’m not talking about imposing censorship here. I’m talking about the benefits of peer pressure when it comes to encouraging us to behave ourselves.


Of course, there’s a downside to having too much “real” when it comes to revealing personal identities online. Cyberstalking and privacy invasion are concerns. And activists in oppressive nations such as China and Bahrain should be able to cloak themselves in anonymity to avoid political reprisals. But in terms of online chit chat, having real identities attached to comments makes Facebook a welcome respite from the verbal cesspools that some social media forums have become.

What do you think about manners and social media? Do we need more or less? What is your personal code of conduct?