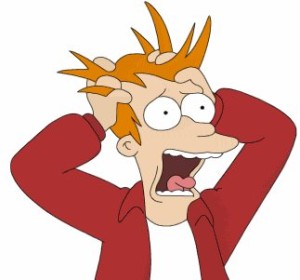 The writing game is tough enough without stressing about minor things. Like how to structure a query.
“But,” you shout, “a query is something worth stressing over, because there are four hundred things that can go wrong with it! I know, because I just read a blog titled ‘The Four Hundred Most Common Query Mistakes.’ So I have every reason to stress out!”
Okay, let’s sit back in our chairs and take a nice, deep, relaxing breath. You would think from all that is out there that query writing is like the cave at the beginning of Raiders of the Lost Ark. You know, one false move and a dozen arrows ventilate you, or you get impaled by spikes, leaving you as a rotting carcass with no agent and no prospects.
Instead of focusing on all the things you can do wrong, why don’t we just look at the simple basics of a query and how you can get them right—every time?
After the salutation which addresses the agent or editor by name (i.e., not Dear Sir or Madam or To Whom it May Concern), three paragraphs are all you need.
The Opening Paragraph
Your plot, starting with the Lead character’s name:
[Lead character] is a [occupation or vocation] who [life situation].
Now write four to six lines which give the ka-ching factor of your plot. Write this paragraph as if it were a 30 second movie spot.
Here’s an example taken from the back cover of Side by Side by TKZ’s own John Ramsey Miller:
Winter Massey is a former U.S. marshal who has made too many enemies on both sides of the law. Lucy Dockery is a judge’s daughter who’s never had to fight for anything in her life. But now Lucy and her young son have been kidnapped and sentenced to die-unless her father agrees to set a vicious criminal free. Massey is the closest thing to salvation they have, but he doesn’t know that the beautiful FBI agent who brought him into the case may be playing a chilling double game — and that a circle of treachery has begun to tighten around him. For Lucy, the time has come to scratch and claw for survival. For Massey, it’s time to stop trusting the people he trusts most. Because in a storm of betrayal, there’s only one way out.
Train yourself to write this way be reading the back cover copy of books in your genre (or the editorial descriptions off amazon.com).
I advise starting off with the plot paragraph because you want to show the agent you can grab readers from the start. Most queries agents see start off with some meet-and-greet stuff. There’s nothing really wrong with that, but since agents see this all the time, why not stand out from the crowd?
The Background Paragraph
Now give a paragraph with the title, genre, word count, and relevant parts of your background. Writing credits are good if they are “weighty” credits. By that I mean a reputable publication. Something a bit more than your local grocery store newsletter. It’s better to err on the side of no credits than a string of flimsy ones. There’s no hard rule here, just put yourself in the reader’s place. Does it truly indicate anything about your writing chops? If you got an award or grant that’s prestigious, or earned an MFA, by all means mention.
Experience in the field you’re writing about is good. Where you were born and how much you love writing is not good. How well you think you’ll do on TV interviews is horrible. Worst of all is saying your book is the “next” anything [James Patterson; Harry Potter] or is definitely going to be on the big screen as a major motion picture, and don’t you, Ms. Agent, want to get in on that action?
Don’t waste any time on how you came to write the story, what your grandmother and critique group think of it, or how you the publisher should market you.
If you had some interaction with the agent or editor at a conference, or heard them speak, or read something good on their blog, you can mention that. Briefly.
[Title] is a 95,000 word thriller. I’ve been a practicing lawyer for fourteen years. This is my first novel. I heard you speak at the Greater Downey Writers Conference and think this project would be a good fit for you.
And please, don’t get cutesy with this paragraph, as in:
Your blog post on queries was almost as good as Dave Barry, LOL! He makes me laugh, you made me laugh, and I’m sure we’ll have both a lot of laughs when that first contract comes in! 😉
You get the idea. Here’s why you don’t have to stress about your bio. The thing that’s going to sell you in the query is your plot paragraph. Let your background paragraph do its work and get out of the way.
The Thank You Paragraph
This is tricky:
Thank you for your consideration.
Then put your name and contact phone number.
Now that wasn’t so hard, was it?
Since most queries are now electronic, and agents don’t generally want attachments, put the query in the body of your email, using the default font and block paragraphs (no indents; single spaced). Put two spaces between the paragraphs.
The subject line should have QUERY in it. There have been reports of none-too-clever attempts to stand out from other emails by putting in fake headlines, e.g., End of the World Clues Here!
Don’t do that. It’s unprofessional. While it might not scuttle your chances of getting a request for you manuscript, it’s a bit of a turnoff. Why make it harder on yourself?
There you go. No stress, no strain. Now you can concentrate on your writing.
(For more on queries and proposals, see The Art of War for Writers).
0

23 thoughts on “The Stress Free Query”