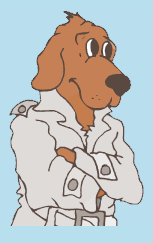 By Kathryn Lilley
Before we get to today’s critique (I’ll explain McGruff later too), check out this fun toy that I heard about from my friend Sheila Lowe—it’s a name generator. They claim to be able to come up with “billions” of name combinations. I tried it and came up with a couple of new ideas by combining their suggestions.
So, here’s today’s first-page critique. My comments are in the bullet points that follow.
SHOPPING CAN BE DEADLY

Shopping, taxis, suitcases, dogs, wine, antiques and Private Investigators don’t mix well together.  Separately, they’re okay; together they can lead to murder.  I know that now, but I had no clue on my first day.  You would have thought that I had a clue since I’m the Private Investigator mentioned above.  My name is Graff, Guy Graff.  I’m twenty-four years old, opened my own detective agency, Graff Investigations, and thought I was ready for anything; wrong again.  Let me start at the beginning.
Detective Rule Number twenty-seven: Get to the point before something with a sharp point gets to you.
It was Valentines Day.  Well it was for everyone else, not for me.  More about that later as I’m trying to get to the point.
I woke up that day with a bit of excitement in my stomach. Enthusiasm mixed with anxiety, like before a blind date when you haven’t been with a woman for a year.  I opened my agency two months ago and today was the start of my illustrious career.
Pulling the handle of my small noisy refrigerator, I knew that I had made a complete break from my former opulent Philadelphian Mainline life.  We had money.  At least my parents did.  I turned my back on it.

So how ’bout it, other readers? Do any of you read cozies? What suggestions would you make?

14 thoughts on “The name game, and another first-page critique”