Well, you’ve seen us discuss the e-book revolution, and now we at The Kill Zone have jumped right on in – producing our own e-book anthology of killer stories. All week we’re going to give you a sneak ‘behind the scenes’ insight into each of our stories – but the best thing you can do (of course!) is buy and download the anthology for yourself. Fresh Kills is available on Kindle at Amazon and in a variety of e-book formats at Smashwords.
The stories in Fresh Kills vary in mood and theme (as you can well imagine!) and I am just as intrigued, as you all are, to read my fellow bloggers‘ contributions. My own short story is entitled ‘The Angel in the Garden’ and it is, believe it or not, the first time I have written a story set in Australia. Here’s a brief description (it’s how I like to imagine the dust jacket would read):
When Constable Duff McManus is called out to investigate a body floating in an ornamental pond, he has to confront both the death of a childhood friend long considered a traitor, as well as his own war time memories. It may be a year since the Great War ended but for many in Australia, there are some wounds that will never heal and some secrets that will never be revealed, not even in death.
I was inspired to write this story after reading Juliet Nicholson’s book The Great Silence over the holidays. She deals with the immediate aftermath of the First World War, focusing specifically on the years 1918-1920, and incorporates first ha

nd accounts from people across the social spectrum. The result is incredibly moving (I went through a whole box of tissues), especially when she deals with the decision to introduce a two minute silence to remember the dead (a hush literally fell across England as the 11th hour struck on the 11th day of the 11th month in 1919) and the return of the unknown soldier, who represented all the husbands, fathers, and sons who never made it home.
I don’t think many Americans realize the deep significance of the First World War for Australia. In many ways it was the event that defined and shaped our nati 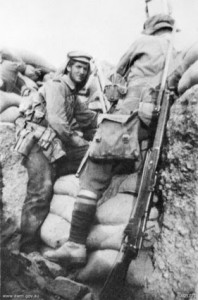 onal identity and altered the way Australians perceived the British Empire forever. When war was declared in 1914 thousands of Australians rushed to enlist – it was considered every Australian’s duty to defend ‘King and Country’. The horrific debacle at Gallipoli and the slaughter of Australians on the Western Front, however, changed all that. The statistics are staggering: From a population of fewer than five million, almost 417,000 Australian men enlisted, and of those over 60,000 were killed and 156,000 wounded, gassed, or taken prisoner. At the end of the war memorials were erected in nearly every town across Australia – you can still see them today – and it is clear from the names of the young men listed that no community or social strata were spared.
In writing ‘The Angel in the Garden’ I wanted to capture a sense of what it must have been like for those soldiers who did return and how they reintegrated (if indeed they ever did) into the shattered remnants of Australian society. In Constable Duff McManus, I hoped to evoke the deep sense of bitterness and anger that permeated post-war Australia. Oh, and I also wanted to kill off someone (always a good idea in a murder mystery!) and I thought who better to target than someone who represented the anti-conscription, trade union movement in Australia. See, even in a short story I cannot help but get caught up in the history books…
I’ve blogged before on the challenges I faced when confronting the medium of the short story and now I face a surprising dilemma – whether to consider writing a longer story about Constable Duff McManus. As a character I find him intriguing. There is no doubt he returned from the war a scarred, wounded man – but what I sensed, from the moment he appeared on the page, was that he had also lost his ‘moral compass’ as a result – and I was fascinated by where that might lead. So now I have a choice to make…do I finally write a novel set in Australia?…
In the meantime, I am content to have a short story out in the e-book world as my fellow bloggers and I dive into the uncharted e-book ocean (hoping to swim of course!). I also can’t wait to read all the stories!
0