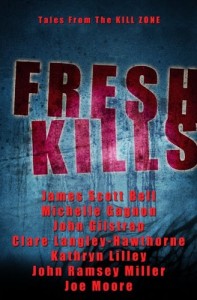 When we came up with the idea of producing an e-book of our short stories, I was horrified. A SHORT STORY? Like Gilstrap, I wrote short stories when I was in high school. I lived in the Mississippi Delta, a story rich environment if there ever was one. I don’t remember but a couple of them. I wrote one called “Baby’s Chair,” which was about an ancient black woman, called Baby, was living in a cypress shack on a cotton plantation. I knew a lot of Cotton Plantation families, and spent time on several so I wrote about an elderly woman who, having long passed her usefulness to the place, and being almost totally blind, spent her days rocking on the porch when the weather was warm. She’d spent her life in the service of several generations of the owners, but now she was totally dependent on the largess of the young owner, whom she had basically raised, and he loved her like family and made sure she had food and shelter. He was all that stood between her and the street.

This youngest of the owning family was running the place and he’d married a coldly calculating-spoiled bitch. The ancient woman had only had one major possession, an old Stickley Brothers rocking chair the plantation owner’s great grandmother had given the now old woman’s mother because it didn’t fit in her refurbished home. The old woman’s mother had rocked this old women in it when she was a baby, and Baby had rocked her own children and grandies in the chair, as well as the owners’ children. There was a cigarette burn in the arm where her father had died and his cigarette had caused the blemish. In fact the chair was filled with memories of her hard life.

The bitch came by with a casserole and it was fast obvious that she coveted the chair because it did fit in with her new den remodel, and it was valuable and she was greedy and coveting what she didn’t have kept her heart pumping motor oil. Sticky sweet, she flatters the old woman, eventually offering a new recliner for the old rickety chair. Baby manages to cleverly deflect the woman’s entreaties, and leaves the woman frustrated and angry. The new owner comes by later (prodded by his wife) and makes the entreaty that his wife wants the chair and he’ll pay her more than it’s worth. He even tells Baby that the chair is valuable to him because it means so much to her, which is true. He obviously loves the old woman, and is embarrassed because his wife is pressuring him to get the chair back. Baby tells him he can have the chair soon because she will have no more use for it, being on the edge of “Going To Glory” as she was. That afternoon as Baby sits in the chair with her memories, she can suddenly see everything, and to her amazement Baby looks at her hands and they are the hands she had when she was very young. Looking up, she sees a horse drawn wagon pull up in front of the porch. Her father is driving the wagon and invites her to accompany him home. Happy, she steps into the wagon and goes off toward Heaven.

Later the young owner returns and finds Baby dead in the chair. He cries. When the ambulance picks up baby, the bitch puts her chair into the back of her husband’s truck.

Weeks later the bitch is entertaining her friends in her new den with pecky cypress walls she’d had taken from Baby’s demolished home, and telling them how this valuable antique has been in her husband’s family for generations and she lies about the history of the valuable chair. When she is alone after the party she sits in the chair and finds she can’t get out of it. In the space of a few minutes, her eyes dim as cataracts bloom in them, and her hands become wrinkled and covered in liver spots.

I wrote dozens upon dozens of mostly forgettable stories––Southern Gothic themes all––and they entertained my family and were good exercise. One was about an old man in a collapsing (but once grand) mansion, who put the stringer of fish he caught in a dresser drawer. They were all hand-written on onion- skin paper and were all lost decades ago. I didn’t care that they were lost so they wouldn’t embarrass me later.

When we Kill Zone authors to write the seven short stories for FRESH KILLS I played with a few ideas. What I came up with was extrapolating on the what would happen if our civilization collapsed and our children and grandchildren were left to for themselves in a world that placed no value on them. I imagined my grandson at ten or eleven wandering in the woods and coming upon a couple, a pair of survivalists, who’d managed to survive in a home built into a hillside and impenetrable to assault. They take the child in, warm him and feed him and things take a deadly turn. I called the piece, FAMILY AGAIN, and hope it is as entertaining to readers as it was for me to write.

I think we all think about what would happen to our loved ones if we were not there to nurture them, and their welfare was left to the kindness of strangers. How would they figure out ways to survive without anything more than the tools we have given them? This is one scenario of how things might turn out, and of course there’s a twist at the end.