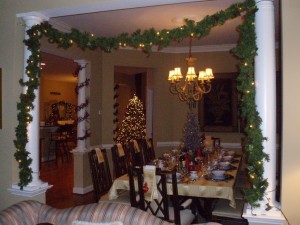 Come Christmastime, though, I become all sappy and tingly. Cynicism makes way for childish optimism.

Our decorations go up the weekend after Thanksgiving, and they stay up through the New Year. The Gilstraps are not competitive decorators, but we’re thorough decorators. In my world, there’s never enough garland or lights. Our Christmas tree is adorned with ornaments from every family vacation, plus two generations of arts and crafts products. My parents’ first treetop ornament has grown too fragile to actually serve atop the tree anymore, but it nonetheless has a prominent place on the kitchen mantle. My son’s favorite Teddy bear from back in the day drives a sleigh that also transports our departed black Labrador retriever’s favorite chew toy.

Are you getting the picture here? Christmas for me is a time for unabashed sentimentality. It’s about loving the people who are in my life, and remembering those who have passed beyond my life. It’s a time when I believe people are nicer to each other. It’s the time of year when Disney-style happy endings always seem possible, if not particularly probable.

It’s with this lightness of heart that I make my daily commute into Washington, DC from my outpost town of Fairfax, Virginia via the Orange Line of the Metro system. I’ve only been a day-job commuter for a little more than four years, but for each of those, I’ve witnessed a Christmas phenomenon that I’ve never seen reported in any of the local news: A nicely-dressed Asian man boards the train at one of the suburban stops, excuses himself, and then sings a Christmas carol to the commuters.

Maybe you need to understand the commuting rules of engagement in Washington, but no one–no one–speaks during the morning commute. We’re very important people in DC, and interruptions are unheard of. Thus, when someone not only sings, but sings of Christmas–the most un-PC of holidays in DC–folks actually get a little nervous. If he had a gun, we’d know what to do; but when he brings a message of cheer, we get flummoxed.

I’ve done a fair amount of singing in my lifetime–both in the shower and out of it–and I know just about every Christmas carol by heart, but even though I’d love to sing along, deep down inside, I’m a coward. Many of my seat mates and aisle mates roll their eyes when they see this unnamed guy. A few giggle. In my gut, I want to go for the Disney Christmas scene where everyone lives inside a musical and no one is embarrassed to belt out the words, but I’ve never grown a big enough pair to give it a shot.

The mysterious Asian man entered the subway car and started with one of my favorites, “O Little Town of Bethlehem”, and I am proud to announce that I sang along with him. I didn’t mumble, either. I sang full-voice, drawing an annoyed glance from the commuters sitting in front of me. I wish I could report that the entire car was united in song by the time we were finished, but alas, that was not the case. A few people were humming, though, and more than a few gave my guy a hearty “Merry Christmas” as he got off at the next stop.

I admire my mystery man. I appreciate his efforts to bring joy to the hearts of grumpy commuters. If only more people would sing, think how much better their days would become.

What do you think? Could you muster the courage to sing along?

12 thoughts on “Go Ahead: Muster the Courage to Sing Along”