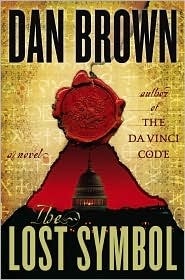 The waiting is over. THE LOST SYMBOL by Dan Brown hit the store shelves yesterday. Love him or hate him, this is a big deal in the world of publishing.

First there was the long 6-year delay. Then the street talk that Brown would never write another book. Then the possible title: THE SOLOMON KEY. Then the revealing of the anticipated cover. And now the day has come. It’s here—all 5 million, first-print-run copies. Now the big questions are: Will it sell as many copies as THE DA VINCI CODE(80 million)? How long will it sit in the number one slot of every bestselling list on the planet? And is it as good as TDC and ANGELS AND DEMONS? Here are two advance reviews:

The Los Angeles Times calls it “. . . like any roller coaster – thrilling, entertaining and then it’s over.”

The New York Times calls it “sexy” and “impossible to put down.”

So what does this publication mean for us thriller authors? The way I see it, if all of us are ships in a naval battle group, THE LOST SYMBOL is the admiral’s flagship aircraft carrier pulling us in its wake, setting the course, and identifying the potential destination. When TDC came along, it created a whole new cottage industry of thrillers that contained secret societies, lost treasures, relics, scientific and religious conflicts, and other like-minded themes. I know that for me, it helped build interest in four of my novels. But in the bigger picture, it created a hunger. Just like Indiana Jones movies renewed an interest in the dark side of the 1930s-1950s, the Nazi, religious antiquity, and archaeology, Dan Brown and his books have continued to feed that hunger. A hunger that will potentially spill over to other books and writers. Because, once readers finish THE LOST SYMBOL, hopefully they’ll be hungry for more. The void must be filled.

Here’s an example from Library Journal where one of my books is mentioned.

I’m excited not only for Dan Brown, but for all thriller authors. This guy is shooting full-court 3-pointers, but the thriller team is ultimately the winner.

Do you plan on reading THE LOST SYMBOL? Do you consider it a thriller genre-boosting event or just another high profile novel by a famous writer?

14 thoughts on “The Dan Brown flagship”