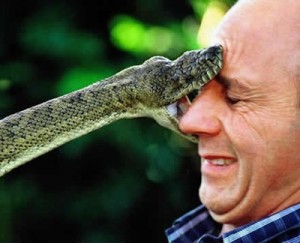 Among the stranger headlines of last week was the following:

Man Driving with Snakes in His Pants Causes Multi-car Accident

A man in Hartford, Connecticut caused a multi-car crash after he claimed two pet baby snakes escaped from his pants pockets . . .

Angel Rolon, 20, told police he lost control of his SUV when the snakes slithered near the gas and brake pedals. Rolon said as he and his passenger tried to catch them, the SUV veered into some parked cars and overturned. If he had a dash cam, like the ones that BlackBoxMyCar offer, he would have been able to capture this incident!

Animal control officers at the scene were unable to locate the snakes, and police have not confirmed Rolon’s story.

Rolon was treated at a hospital for unknown injuries. Police say they gave him a summons for reckless driving and other charges. One can only assume a criminal defense lawyer is going to be faintly amused if this case lands on their desk.

Now as I recall, my dad told me never to drive with alcohol in my blood or snakes in my pants. He was very emphatic about that. Doesn’t every kid learn this valuable lesson before taking the family car out for a spin?

“Remember, son, no drag racing and no legless reptiles in your Levis. Have you got that?”

“If you have any ectothermic squamate in your jeans while you’re behind the wheel, you’re grounded.”

We all set off on our “drive” to write with some trepidation, knowing there will be inevitable setbacks, disappointments, even book-ending accidents. But that doesn’t stop us, if we really have the chops, the desire. You want to write, you write, snakes or no.