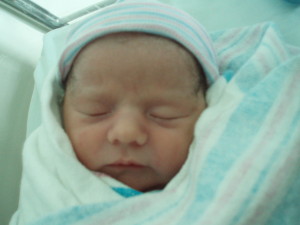 I almost didn’t make it here this week because my middle son’s wife had a baby yesterday and we have been keeping their two-year old. I haven’t had a moment to do anything but gather the rope and throw the lasso as he roars by. I hate it when people show pictures of newborns because most are either ugly or featurless, and really …who cares. I just put this picture here because this isn’t true in my family. For some odd reason, all of my grandchildren are born looking like movie stars.

Someone asked me the other day if I had written any novels with serial killers in them and I said not yet, and probably not ever. All of my books have killers in them, but the motivation for my killers is usually based on self-interest. A person who kills over and over again for sexual gratification holds no interest for me and I’m not comfortable writing about them. My killers are usually murdering for revenge, profit, in self-defense, or due to a twisted sense of justice. My killers [those who are main characters] are complex individuals. They are usually intelligent, but almost all have a warped perspective on the world.

I like writing villains. A protagonist usually has to win more or less fairly against an opponent who isn’t into the rules so much. Not adhering to any rules of engagement usually gives my killers an edge against their opposition. Yeah, it really wasn’t going anywhere near new ground.

So, tomorrow is Father’s Day, and as it turns out between the new baby (see above), my older son’s family doing something because he is a father of four, it will be a smaller than normal turnout. It will also be 99˚ (after weeks of rain–think sauna) so I’ll be staying close to the air conditioner.

So I ramble back and try to tie something together…

Now I have six grandchildren, three-and-three, and instead of merely messing up the house, they can wreck several acres when they visit together for Sunday dinner.

I’ve always heard that the worst killer imaginable would be a three hundred pound three-year old, and I believe it. My oldest son doesn’t allow his children to use the word “kill”, but his children (6 & 4) have “accidented” two baby chickens, legions of frogs, lizards, bugs, etc… Now children will do these things when they are together, never on their own. Thrill killing on the farm. They are good kids, but kids are like adults. As long as they are not accompanied by other adults they don’t usually get into mischief. Two or more people and there is a chance for escalation. The clear exception is writers who do all of their mischief when they are alone.

By the way the new baby (born yesterday) is Shay Aurora Miller and she weighed 6 lbs 13 Oz, and I only mention this because I’ll call her Sam, because I should caption the picture.

9 thoughts on “Serial Killers ….Not In My Books, and New Babies”