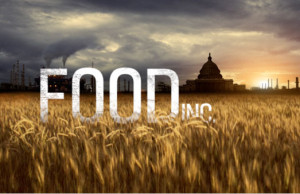 I literally just got home from seeing this incredible documentary Food Inc, and am still shuddering over much of what I saw. I tell you some of the behind-the-food-you-eat politics, processes and industrial intrigue is enough to put any thriller to shame.
Although I was already a proponent of organic and local foods, this movie opened my eyes to the food production industry in a way that I never expected – It scared me. From contamination of our food sources to horrific conditions (for workers as well as animals) and the unconscionable practices of companies that perpetuate the dangers in our current food production system – this movie affected me as viscerally as any horror film would.
I wept for the mother of 2 1/2 -year-old Kevin who died after eating a hamburger contaminated with the E. coli strain O157:H7 and I was sickened by images of chickens who are artificially bred so that their limbs cannot sustain their own weight anymore. I honestly thought I would vomit after seeing images of how meat is processed in this country – not because I am squeamish, but because I was so outraged at the chemical treatments that are now needed to prevent contamination – contamination due to the fact that we now feed corn rather than grass to our cattle. Don’t even get me started on immigrant worker issues or the practices of companies such as Monsanto…because my outrage would just be stirred anew.
The greatest thing about this movie, however, was not just that it lifted the veil on the food production industry in America but that it also made me feel empowered to make the changes that will hopefully, one day, alter the system forever. As a writer I want to delve deeper into some of the stories behind the reports in this film – because truth seems stranger and more terrifying than any plot I could have concocted. As a mother, I can make a difference to my family each day and with every meal – and have vowed to become a ‘mindful eater’. I have no excuse now not to eat organic, local produce that is in season and which comes from companies who respect their workers, their animals as well as the environment. Pretty easy in California but the film recognizes that for many struggling families it is cheaper to buy a cheeseburger than a head of broccoli (what kind of crazy system lets that occur?!)
I tell you, after seeing this film, if I do write a dark noirish thriller, it won’t be called “The Firm” or “The Chamber” it will be called “The Farm”.

8 thoughts on “Food – More Frightening Than Any Thriller”