We’ve discussed the Kindle e-book reader a number of times here in the past. Even though its market penetration is still modest at best, I think everyone admits it is or will be a factor in the future of publishing. So with 230,000 titles (including mine) available for downloading onto the Kindle, it’s probably worth discussing again now that the product has some significant upgrades.

Recently, Amazon introduced the new Kindle 2. Some of the features in the updated version are a battery 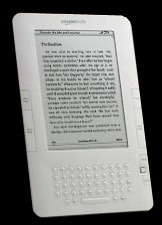 that will last two weeks, more contrast on the black-and-white screen than the previous version, faster wi-fi connections, more memory, a smaller size that weighs less than the previous device, more storage (1,500 books rather than the current 200) and a speaker with a new function that reads the text aloud. Also, Stephen King’s new novella UR will be available exclusively on the new Kindle. The latest device costs the same as the old Kindle: $359.

The new "Text-to-Speech" audio function has raised some concern with the Authors Guild who stated that it must be considered an “audio right”, but Amazon said that customers would not confuse text reading with an audiobook. (Note: this is not the same as an audiobook where a professional talent is paid to read the story in a dramatic fashion.) I haven’t heard it but I assume it’s done using a synthesized voice perhaps like a dashboard GPS.

Another issue that was raised is the price of e-books for the Kindle: $9.99. Some publishers feel that the price is fine since they are investing in a lot in costly digital technology. And some say that e-books should not be considered of less value than the paper version and assume they would cost less.

With e-books being a very small (less than 1%) portion of book revenue, it would seem to me that having them at a reduced price would encourage buyers to venture into the e-book domain. But I’m sure that publishers don’t want to give up revenue in these hard economic conditions.

So, with the upcoming availability of the new Kindle 2, my questions are: Is it smart of Amazon to price the product the same as the older version? Or should it be priced cheaper than the 1.0 version even with the added features? And is $9.99 a fair price for e-books or should they be sold for less than say the mass market PB version of the same book?