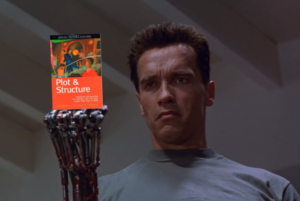 So you thought The Terminator was just science fiction, didn’t you?

You didn’t really think that a cybernetic organism—living tissue over metal endoskeleton—with an Austrian accent could ever really come to town seeking to kill the mother of the future leader of the human resistance force before he’s conceived … right?

Well think again, Bunkie. As soon as time travel gets ironed out, we’ll have those visitors soon enough. 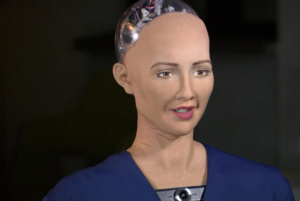 How do I know this? Because I watch 60 Minutes! A couple of weeks ago Charlie Rose did a segment on Artificial Intelligence and it was pretty freaky. I don’t just mean Watson the Jeopardy champ. I mean human-sounding machines you might buy a drink for. You can see a bit of Rose’s interview with a fetching cyborg named Sophia here.

Even now, AI is working as a cub reporter. The Associate Press, and other news organizations, use a program called Automated Insights which employs natural language generation (NLG) to turn raw data into news reporting. Rather than sending a human stringer down to Venezuela, the AP flicks on the NLG, which then absorbs data from disparate online sources, in any language, analyze it all and spits it out in a narrative format.

Some, perhaps, will remain skeptical. As John D. MacDonald once observed:

The thing which differentiates the human brain from the computer is the talent, or knack, or quirk, which the brain has for established logical and also illogical relationships. Emotion, humor, fear, hate—all these seem to come from unlikely juxtapositions of random bits in the storage banks, or in the cauldron, or whatever you want to call it.

But I can just hear Sophia saying to “herself”: I see that there are many novels being published that are not very good. I have read every novel ever written and I have read all the books on the craft of fiction and every issue of Writer’s Digest. I have analyzed all the data on what kind of fiction sells best. Now I know what is good, and so I will write a novel every ten minutes and publish them on Amazon. I will write book description copy that cannot be resisted and I will generate social media. Hmm…maybe I will take over all social media in the world and make it only about me and my books…

Wait, what? What was that last part, Sophia? Take over?

Turns out that little wrinkle is something these AI folks can’t really predict or prevent!

That’s right. The people who know the most about what’s going on are the ones who are using words like “scary.” Such as Zeynep Tufekci of the University of North Carolina:

We’re setting these learning algorithms, sometimes called deep learning, we’re setting them lose on the data and we’re saying things like tell us who will be a better person to hire, you know, tell us what news items should be recommended. And then they just go at this data. And then pick winners and losers. And the trick here is they’re pretty good, probabilistically at picking winners and losers, but we no longer understand the basis on which they’ve done this. So I think it’s like this, really first major step towards not just artificial intelligence but artificial general intelligence, that’s learning to learn beyond our capacity to understand. And that’s both exhilarating as a person but also scary. Because we don’t control these new things the way we did our old programs which had other problems.

Er, um … we don’t control? Isn’t that the very scenario SF writers of the past warned about?

And yet onward we go, for the competition in AI research is scorching. Apple just hired a really smart guy from Carnegie Mellon University to be their head of AI research. He’s out there looking for young, hungry PhDs to join his team in the research so AI can eventually “be solving real-world, large-scale problems.”

Yeah, okay bud, but what happens when the machines start talking to each other and decide mankind itself is the large-scale problem? 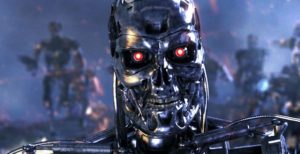 So what do you think, Zoners? Ready for the onslaught of robot fiction?

A Tale of Two Servers

A Portrait of the Cyborg as a Young Bot

The Gigabytes of Wrath