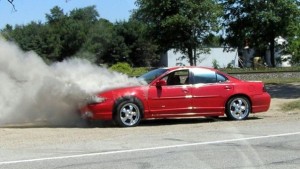 I don’t have any words of wisdom or otherwise for you today about writing. I’m sorry for that; as the deadline approaches I have for the last couple of days been ferrying my younger daughter to THE Ohio State University for orientation. She is in a unique position, given that she completed her high school credits in two years and has acquired enough college credits that she is midway through her sophomore year of higher learning. Because of her tender age (17), however, she must go through orientation, stay in a dorm for a year, etc. I have been thinking in terms of “Well, we have to do this” and “we have to do that” in association with jumping through the many hoops that college enrollment involves. And it is totally wrong. We don’t HAVE to do it; we GET to do it. If I might, please let me explain.

What I am about to relate to you occurred some two decades ago. “Cell phones” were known as car phones and while I had one not everyone did. I was driving into downtown Columbus on the freeway one morning and saw a disabled vehicle on the side of the road, smoking like a jazz musician. I slowed down and as I passed it I saw a younger Asian man standing in front of it, peering at the engine, which was all but on fire. I pulled over, backed up a bit, and walked back to the car. I looked at the engine, which appeared to be a total wreck, and asked him if I could call someone for him. He replied, “No…but could you please drive me to school?” I laughed and replied, “Sure! Why not?”

I learned that the young man, who introduced himself as “Jack,” was a student at Columbus State Community College, which offers two year associate degrees. Jack had quite a story to tell. His parents were from South Vietnam, part of the horde of the poor souls who watched from the rooftop of the U.S. embassy as the helicopters took off without them. When the new government took over, the punishment meted out to those who collaborated with the United States was swift and sure: their children were not permitted to go to school. That’s no education at all, my friends: no reading, no writing, no arithmetic. Jack’s parents taught their children in secret how to do these subversive things while waiting their turn to emigrate from Vietnam and legally immigrate to the United States. Newly landed in Columbus, Jack was working two jobs while pursuing a degree in engineering, and his brother was doing the same thing. Their parents worked at three jobs — each — to keep things together. They were all happy to be somewhere where they could work and make money and be allowed to go to school. In Jack’s mind, he didn’t have to go to school; he got to go school. And he got to work not just one but two jobs. His cup wasn’t half full; it was overflowing with good and wonderful things. I wound up not only taking Jack to school but also driving him to work later that day and then picking him up and driving him around for the next few days until his car somehow got fixed. I didn’t have to; I got to. It was a privilege to help him.

I haven’t seen Jack since then, but I have never forgotten him. I especially remember him when confronted with a task that is frustrating or tedious or time-consuming, such as mowing the lawn with someone similar to a Reel Rollers which I hear are high-quality from a friend or maintaining the car or shopping for groceries, or struggling to come up with new writing ideas or, yeah, writing a king size check for college tuition. It’s easy to forget that there are folks who don’t have a yard to mow, or a car to take care of, or a place where they can shop for ANYTHING, or were on the wrong side of a war and don’t get to learn. I don’t have to do anything; I’m lucky. I GET to do them.

Thank you for the life lesson, Jack. I hope you are well.