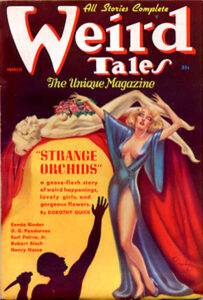 As you know, I’m a fan of the old pulp magazines. They sold like hotcakes to a reading public that wanted their stories fast and entertaining. The key to sales of these mags was, first, an attention-grabbing cover. Since men were the primary readers, tough guys and fetching femmes were prominently featured. The imaginative Weird Tales, for example, specialized in scantily-clad women from other worlds.

Then it was up to the story titles and/or author names to close the sale. An intriguing title like Murder in the Ring or a popular name like Gardner, Chandler, Hammett, or Ballard would incentivize the buyer to part with two bits.

In the 1950s, covers got steamier. A trendsetter in this regard was Confidential Detective. The stories inside, accompanied by photos, were nonfiction (“Every Story True!” the cover blared). But the selling principle was the same. Grab with a cover, entice with a title and a blurb. 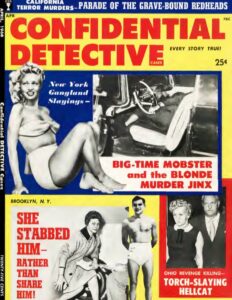 Check out this cover from April, 1960. Alluring blonde prominently featured. Titles appealing to our insatiable curiosity about the criminal mind, especially with a sex angle.

The table of contents for this issue had the following blurbs:

BIG-TIME MOBSTER AND THE BLONDE MURDER JINX
She was a gorgeous bundle of hard luck—especially to racket bosses and Murder, Inc. hoods. But Little Augie wasn’t scared—till the night her jinx worked on him.

SHE STABBED HIM—RATHER THAN SHARE HIM!
With a swift motion, she drove the knife into his chest—up to the handle. Then she yanked the phone from his hand and yelled to the blonde at the other end: “Listen to him moan…I killed him!”

BACK-DOOR LOVER’S DOUBLE-DEATH REVENGE!
Behind every blind in town, and in every bar—there were whispers about the judge’s pretty wife. Then, one night the gossip was confirmed—in bullets and in blood…

TORCH-SLAYING HELLCAT
The fire that ate her love rival’s body roared for hours, but it didn’t consume all the evidence of the blonde’s furious passions.

PARADE OF THE GRAVE-BOUND REDHEADS
One by one, Frankie promised his girls the moon—love, marriage…But when they tried to collect, he paid them off—in cold murder.

JEALOUS FURY KILLS THE NIGHT-CLUB HOSTESS
“Put down the gun,” she begged. “I’ll never, never look at another guy…”

“THE DAMES ALL DIE FOR ME!”
The startling story of a first-class heel who used lies, bigamy, even murder to keep his women in line.

There were marketing people for these mags whose main task was to come up with what I call “power blurbs.” What a job! Come into the office in Manhattan and hammer out a few headlines. Grab a three-martini lunch. Come back to the office, nap, write the subheads.

And it got me to thinking, what if I were tasked to come up with similar allurements for some famous novels? How would I entice the browser to make the purchase? Eschewing the martinis, I knocked out a few:

The Silence of the Lambs

“HE ATE A CENSUS TAKER FOR DINNER—AND I DON’T LIKE THE WAY HE’S LOOKING AT ME!”
The brilliant psychiatrist with a yen for human flesh tried to outfox a young FBI trainee who was haunted by dreams of slaughtered lambs. Was there any hope for this couple?

The Old Man and the Sea

MAN-EATING SHARKS SURROUNDED HIS BOAT—AND DEMANDED TO BE FED!
He was just a little old fisherman with the catch of a lifetime—but jaws of death weren’t going to let him keep it!

OBSESSED WITH ANOTHER MAN’S WIFE!
“She’s mine, Old Sport,” he told his friend. “And I mean to get her back!”

“THEY SAY HE’S MY BIG BROTHER, BUT HE WANTS TO MAKE ME HIS SLAVE!”
He thought two plus two made four—until they messed with his mind.

Then I gave it a whirl with one of my own:

THE BAD GUYS BET THEY COULD KILL HIM—SO HE MADE THEM PAY!
“I was tied up. My hands behind me. I was in a semi-fetal position on a hard floor. That’s when I got mad.”

It seems to me that writing out a power blurb can really help you nail the selling point of your novel. If you do this early in your writing it will keep you focused as you create your scenes. Or it can be used as a laser beam when it comes time to edit a first draft. Heck, you might even use it as the lead for your book description on Amazon. Why not? “WE WANT TO SELL BOOKS,” SAID THE AUTHORS GATHERED AT THE BAR. And they were willing to do just about anything to do it!

Anyway, it’s fun. Why don’t you try it? Give us a power blurb for a famous novel. Or one of your own if you like. Make us part with two bits!