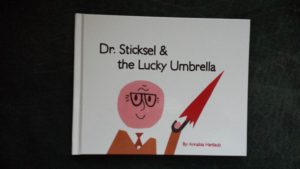 I read the best book ever last week. The book in question is titled Dr. Sticksel & the Lucky Umbrella. It is written for elementary school readers by my daughter, Annalisa Hartlaub, who self-published it with a limited print run for a specific purpose. More on that in a moment.

Please let me explain who “Dr. Sticksel” is. He is Dr. Phil Sticksel, a highly regarded meteorologist who worked worldwide for Battelle Memorial Institute, a science and technology research organization based in the Columbus, Ohio. Battelle partnered with Longfellow Elementary Math and Science Magnet School in Westerville, Ohio, which Annalisa attended. A major element of that partnership involved Battelle providing past and present personnel to Longfellow to assist with its science program. My first contact with Dr. Sticksel was at a school function during Annalisa’s first-grade year at Longfellow. He told me by way of introduction that Annalisa was functioning at genius level and was destined for amazing things. He mentored her through elementary school and beyond. He was (to name but one instance) in attendance when Annalisa, at the time a sixteen-year-old high school student, presented a research paper at The Ohio State University School of Medicine. Dr. Sticksel, now well into his eighties, has experienced some decline in health in the last few years but still stays mentally active and has continued through me to keep up to date on Annalisa. He was thrilled to learn that she presented another research paper this past September at the 2017 IEEE VIS Conference in Phoenix. She was the only attendee to do so who did not have a degree. “One of MY students did that?!” Dr. Sticksel asked. Yes, Sir. One of your students.

Annalisa at age twenty will be closing her career at The Ohio State University in three weeks by earning a degree in neuroscience. She did, however, take the time to fulfill a long-held dream. With the assistance of a grant from OSU’s STEP program, Annalisa wrote Dr. Sticksel & the Lucky Umbrella, the book I mentioned at the beginning of this bit of logorrhea. Yes, I might be prejudiced, but it is wonderful. It tells the story of a meteorologist who, with his pet opossum, has a lucky umbrella that keeps the rain away. Every word is true, to one degree or another. Annalisa put it all together — text, artwork, and all — and had the books printed by the fine folks at bookbaby. When the books arrived we took Annalisa several miles north to Dr. Sticksel’s home and surprised him with several copies. He was stunned, overjoyed, and surprised. It is of equal importance to note that, after Annalisa slips a copy or two of Dr. Sticksel & the Lucky Umbrella to Mom and Dad, the remaining copies of the books are being donated to the Westerville Elementary school library system. Dr. Sticksel may be retired, but he will live on in the halls of the Westerville schools and in the hearts and minds of the students for years to come.

Annalisa’s father, of course, sees this new book as the springboard for sorts of potential projects. “What about a Dr. Sticksel series, like Rotten Ralph?! A cartoon show on Netflix! Action figures! A four cup cineplex movie! Greeting cards! Video games! Graphic novels!” Annalisa doesn’t want to hear it, at least not now. Perhaps she will in six months, at which point she’ll convince herself that a spinoff project is her idea. For now, however, she concurs with the observation I made as we drove away from Dr. Sticksel’s home. “You know,” I said, “I think you made him really, really happy.” Annalisa responded, “That’s all I wanted to do.” Amen to that. I can’t think of a better reason to write a book. 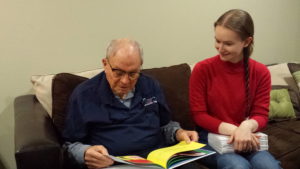 So…authors…when the rubber hits the road, why do you write? Other than for filthy lucre, of course?  And readers…why do you read? I mean, really? What is it about reading that entertains you? Tell us, please. And Happy Thanksgiving, from my house to yours.