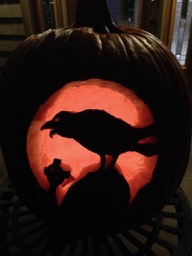 I’m not sure when October became Halloween month, but I’ve decided it’s not such a bad thing. Over the past few weeks I’ve gotten lots of good recommendations for scary books and films. My husband and I made it a point to watch some beloved old-school scary films together, including The Haunting (based on Shirley Jackson’s The Haunting of Hill House), The Sentinel, and Rosemary’s Baby.

We also watched the television series, The Haunting of Hill House, the Netflix adaptation *cough cough* of Jackson’s novel. Ahem…

Have you read the 1959 novel? If you haven’t, then I’ll wait here while you do. Don’t worry. It’s long, but I promise you’ll speed right through it. But if you’re too busy, here’s the premise: University professor studying psychic phenomena gains access to a reputedly haunted house called Hill House, and brings along a presumed psychic (Theo), a disturbed young woman (Eleanor) who ostensibly caused rocks to rain on her house, and a young man (Luke) who is a descendent of the ill-fated family who built the house. They investigate over a period of a few days, and Many Scary Things happen. Someone dies.

I LOVE THIS BOOK. It’s also beloved by legions of fans. It’s nuanced and original, yet also and comfortingly familiar, with its haunting tropes like creepy statuary, darkness, unidentified banging, unsettling architecture, mysterious writing on the walls, a harrowing origin story, and bizarre servants who won’t stay after dark. But the true strength of the novel is that it is less a horror story than a tale of psychological suspense and festering fears and tensions. In fact, it was nominated for the National Book Award.

The 1963 black-and-white film adaptation adheres pretty closely to the book, and Julie Harris is brilliant as the fragile virgin, Eleanor.

We only speak in hushed, abashed tones about the 1999 Catherine Zeta Jones remake.

Husband and I began watching the Netflix series set in both the present and the 90s with heightened expectations. Then we almost didn’t make it through the first hour. I confess, we were pretty angry. Nothing felt right, and very little felt familiar. For openers, the house is ostensibly being renovated in order to be flipped by the Crain family. Um, what? There are five children in the family, and Timothy Hutton and Carla Gugino play the Crain parents. The children are named Steven, Luke, Nell, Theo, and Shirley. Again, what? The adult Steven Crain is a bestselling writer who made a bajillion dollars telling the family’s darkest stories in his novels. Shirley is an undertaker, Luke, a heroin addict, Theo, a psychotherapist, and Nell–well I can’t remember, but it was something innocuous. They’re estranged from their father, and their mother is dead.

The two story lines eventually bear each other out. We discover why the mother died, and how she was killed. We learn what’s truly wrong with the house. But very, very little of this plot has anything to do with the book or the 1963 film. It’s as though the creator were a magpie who took all the sparkly bits of the novel and sprinkled them through an entirely new story.

Forgive my being vague, but I want to avoid spoilers in case you want to watch it. Which you should! It’s very good if you simply dismiss any notions you have about the book or the 1963 film. It does stand on its own beautifully. And, in my opinion, it should just be called The Forever House. But no one asked me, darn it.

Something else to consider: What adaptations of your favorite novels elicit strong opinions from you, either way.