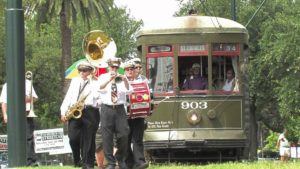 Barring something unforeseen, I will be turning 65 tomorrow. I will spend most of  the day driving to New Orleans where I’ll be doing some business next week and occasionally popping into the Bouchercon host hotel (as well as assisting Jim Born with his excellent Weaponry panel at 9:00A on Saturday September 17, for both of the attendees who do not drink even when they’re in The Crescent City). The major milestone for me, however, will be riding New Orleans’ iconic streetcar line…for 40 cents a ride. Senior citizens in New Orleans get to do that.

An elderly friend told me that getting older is actually like aging in reverse. When you’re just a few years old people are constantly taking things away from you or putting them out of reach, a practice which we now call “childproofing,” You get trusted incrementally with objects, privileges and responsibilities until one day you wake up and you’ve got a whole collection of those, which include but are not limited to driving and automobiles, jobs, voting, drinking, military service, intimacy, and child rearing. You think you’re overdue for most of them by the time you get them, but the truth is that you’re probably not ready. Experience is the best teacher, however, and we all muddle through a continuum that runs between success and disaster and all points in between.

After several decades, though, things begin to change. People start taking things and choices away from you again. The guy at the hardware superstore asks if you need help carrying any purchase that weighs more than a pack of light bulbs. Your children think that you have early dementia if you are unable to keep their schedule and yours straight without a calendar. The question “How is work?” is replaced with “When are you retiring?”. Your first birthday congratulations at 65 is from the federal government: it’s a red, white and blue Medicare card. And that driver’s license that was so important to obtain five decades ago is possibly only an accident or three from being retired. As for me…everything still works. I can carry an old-fashioned microwave up two flights of stairs without sustaining a heart attack (though it was a very near thing). I can drive nine hundred miles in one day (though I’m split it up out of caution). Things aren’t being taken away from me yet, even though I am more  Mickey Donovan than Harry Coombes at this point. I wouldn’t have it any other way. And I am going to ride those streetcars next week —on every line I can — for 40 cents a trip like they are a pack of 3-dollar government mules.

So let’s open it up. What was your favorite birthday celebration? Do you have a tradition? What would you like to do, but haven’t had the fortitude or the ability to do, at least at this point in your life?