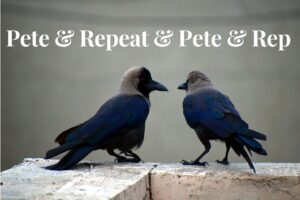 Recap sequences (according to Wikipedia) are the “in previous episodes” narrative device used by many television series to bring the viewer up to date with the current events of the story’s plot. It is usually a short 20 – 40 second montage of important scenes.

Recap chapters are a similar device, that could be used in series books, at the beginning, to bring readers up to date. Note: You won’t find this phrase defined in a dictionary or discussed on Wikipedia as we are using it.

I thought of this subject for today’s discussion, because it is something I am considering for book #4 in a series. The book is currently out for beta reading, and I am getting multiple questions from readers who have not read the first three books and are interested in information from earlier books.

Two posts worth reviewing, that are relevant for today’s discussion:

And Sue’s post on “Tips to Create a Series Bible” – https://killzoneblog.com/2020/12/tips-to-create-a-series-bible.html

Series books need to stand alone, so readers can read them in any order, but we need to provide those readers with the knowledge of what came before so they are not confused. And frankly, readers of previous series books often need some reminders. In general, this can be handled in one of two ways: tell before (a recap chapter) or weave the reminder into the telling of the current story.

As I thought about this dilemma, I wondered what techniques other authors have used. Are there any other choices? So here is the thread of my search to educate myself. First some definitions (based on discussions in Wikipedia):

Foreword – usually written by someone other than the author. Tells readers why they should read the book. Usually signed.

Preface – usually written by the author, and tells how and why the book came into being

Introduction – a beginning section to a book, article, or essay which states the purpose and goals of the following. More likely used in nonfiction to introduce the reader to the main topics and prepare readers for what they can expect. Used in some classic children’s literature, where it is used as a preface. The only thriller with an introduction I could find on my shelves was Nelson DeMille’s Wild Fire. And there it was used as a preface.

Prologue – the opening to the story, establishes the context and gives background details, often some earlier story that ties into the main one

Appendix – in the back matter, used in nonfiction, gives useful additional information, but even without the rest of the book is complete

As I initially thought about these choices for “recapping,” it seemed to me that the preface, the prologue, and the blurb were potential tools. I was curious to see if any authors were doing recap chapters. I googled “in previous episodes” and found “recap sequences.” When I added “books,” I found an interesting discussion – http://bestfantasybooks.com/forums/threads/how-much-to-recap-at-the-start-of-a-new-book-in-a-series.2934/page-2 – from 2016, discussing recap chapters at the beginning of  books. The discussion boiled down to a disagreement between those who liked a recap chapter, and those who didn’t.

I would insert here that this discussion was in the context of the fantasy genre, and might change the discussion because of world building, the limits to the magic in a specific series, unusual characters and beings, etc. Thrillers and suspense might generate an entirely different discussion. That’s what we’re doing today.

In any case, in the above blog discussion, the minority wanted their recap “woven into” the story.

The majority preferred a recap chapter at the beginning, leaving the “reminding” out of the way for the present story. I was surprised at the results.

Some interesting comments from the discussion are worth repeating:

“Recaps and summaries are what lazy writers do for lazy readers.”

(Having a recap chapter) “spoils the immersive experience” that should begin at the beginning of the first chapter.

And, beginning to read a recap chapter as the first chapter means the “countdown to terminal boredom has started.”

By the end of the discussion, the host decided in favor of a recap chapter in his WIP. Here are a couple of his comments:

Writing the recap chapter was “really useful to me as the author to reorient myself. By trying to sum up the story thus far it reminded me of what the audience needs to know for the plot to make sense…”

(The recap chapter) “was the best option by far” and he “was surprised that more authors don’t do this. Yet I can’t think of one author who has.”

As I thought over the comments in the discussion, I began looking for ways to keep everyone happy – that is, all readers happy. And I was reminded of the “prison of two ideas,” meaning we always have an infinite number of choices, and we do not have to be locked in to only two choices. So, I came up with some additional options for you to consider for target practice. Shoot them down, or protect them from destruction.

“Series Preface” – The preface is placed in the front matter, before the story begins. Readers can choose to read it or skip it. Placing it in the front matter keeps readers from getting bored if they don’t want to read it, and prevents the stopwatch from beginning on that “countdown to terminal boredom.” In this location, it could be kept brief, with just enough material to bring the reader up to speed for the current book. It could also be used as a blurb to entice the reader to read the earlier books in the series.

“Series Appendix” – The appendix is used in nonfiction to make additional information available to the reader and to refer to other sources. Why not use it for a place the reader can look when they want answers to questions about earlier books in the series? Being in the back matter, it definitely won’t get in the way of the reader anxious to begin the book. Being in the appendix, the author could get as extensive as he/she wishes, allowing for readers with extensive questions to find answers or references. The material could be organized in multiple different ways. And, again, if the material is organized by book (previous series books), this would be a way to make the material both “recap” and blurb.

One could get really creative here with references to a website with “Sue’s Series Bible.” I have read that some of J. K. Rowling’s success was due to an extensive website where she kept readers busy while she was writing the next book.

“The Whole Enchilada” – And, not to be a prisoner of two ideas, an author could use a combination of the “series preface” and the “series appendix.”

And, just think. If this is actually something new (maybe it isn’t), and it catches on with fiction writers, we here are TKZ could say we were part of its creation. At least we could lay claim to the inception of the two terms, “series preface” and “series appendix.”

So, now, dear TKZ family, your mission, should you choose to accept it, is to defend the tradition of weaving previous events into the fabric of the current story, champion a new garment to refresh our memory before we admire the current story, or break free from the prison of two ideas and invent something entirely new.

Take aim, and shoot down the ideas, or tell us if you like them. Give us your reasons, pro or con. If you have other ideas, please tell us and give a defense of your idea. Put on your “What if?” hat and let the creative juices flow.

What better ideas do you have? Please give a rationale and defend them.

As always, should you or any member of your writing force be caught or killed, the Secretary will disavow all knowledge of your actions.