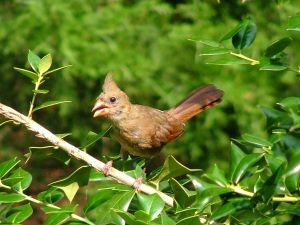 Inspiration, as has been often discussed on this spot, comes from strange places. Anyone who has put cursor to screen for more than a few sentences also knows that inspiration is but the very important start of any story, long or short. One needs interesting characters doing interesting things, or characters who have interesting things happen to them. Sometimes, when dealing with the latter situation, authors find themselves with a character who is not only painted into a corner but also glued to the wall. There are times when that happens where one must give up, go back a couple of pages, and do a re-write. Another alternative, however, is to step back, look at what is around you, and see if the world around you provides a solution. That alternative was given to me on Wednesday by happenstance.

My wife loves wild birds. We have feeders in the back, front, and side yards, and birdhouses in the front yard tree. We have so many feeders that the Franciscan monks send money to US pay for seed (just kidding). We do get a lot of birds around the house, though,which means we don’t leave doors open. Birds don’t like to fly into buildings, but they sure wind up in a lot of them. Go into any big box store, particularly one of those giant supermarket operations, and look up. You’ll probably see a bird or two flying by. When I was a wee lad attending Catholic grade school nothing would crack the eighth grade girls’ choir up faster than a starling dive bombing the loft. Yeah, birds are like cats in that way: they try really hard to get in somewhere, and then decide they would rather be somewhere else, like outside. This is of course selectively true across the biological kingdom — and no more so than among the males of any species — but today we’re just talking about birds, and the noise in my house.

I was working on a tale a couple of days ago, a story which begins with a guy waking up in the middle of a desert and having no recollection of how he got there. He realizes after a few moments that he is surrounded by something really unpleasant and potentially dangerous. He gets out of that problem and jumps from one problem to the next. My unfortunate fictitious friend possesses neither firearms nor adaptive skillsets so he can’t fight his way out of predicaments, and they’re not really the type of situations that he can think his way out of, either. That doesn’t leave many alternatives, but his creator (that would be me) did a little of this here and a little of that there and before you know it my character was leap-frogging pans and straddling fires like no one’s business. I then reached a point where I painted him into that corner I mentioned earlier, and couldn’t figure out a way to get him out of it that would be consistent and, more importantly, believable when one considered what had happened before. I really liked the pages leading up to the dilemma, too, and was loathe to rewrite them. Benign neglect of a few minutes’ duration seemed to be in order. Then I heard THE noise. It was coming from right above my basement office, which is beneath our attached garage. I went upstairs, opened the door leading from the garage to the house, and got dive-bombed by a cardinal. I’m not referring to the kind that lives in a cathedral but takes a vow of poverty; I’m talking about the feathered type. It had gotten trapped in the garage and couldn’t find a way out. I managed to get the door to the house closed behind me before it flew deeper into the residence (that would have been really interesting). It seemed that a little common sense was in order so I opened the garage door. I was worried the bird was going to damage the garage and I would have to call someone like https://balancedgaragedoors.com to come out and repair it! I’ve had a few issues with my garage door before and I was hoping I wouldn’t have to pay out for a repair again. Repairs can be really expensive! Luckily the bird didn’t damage anything so it saved me some money, but I know a few great garage door companies who I would’ve called if I needed to.

Cardinals, it seems, will never be employed at Oak Ridge doing atomic research. This bird, like my protagonist, couldn’t find its way out, despite the wide open garage door that was present just a couple of feet behind it as a careened posterior over elbow all over the garage. It was too frightened to see the way out. It struck me, after watching my new bird friend for a few minutes, that my story needed a similar exit strategy, one that would have been obvious to an observer who was not panicked but that my hapless protagonist was overlooking in his fright and haste. I started thinking creatively along those lines while I watched the bird and as it finally realized that 1) the door was open and 2) it was open to OUTSIDE — worms, seed, sunlight, and all it could want — it flew out. I put the garage door back down and spied it a few moments later as it sat on the bird feed outside the front window, pecking contentedly at seed. I was content, too, as I had solved my creative dilemma.

I doubt that the cardinal learned anything, but the lesson for me was that you can learn a lot, and even occasionally solve a problem, by watching what is going on around you, even when at first it doesn’t seem to be relevant. Does anyone have similar stories? What do you do when you’re writing and get stuck on a problem? Do you back up and take another path, or do you bulldoze your way through it?