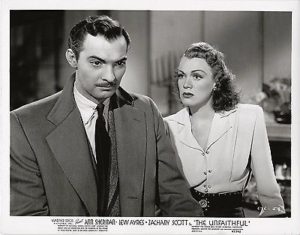 The other day I turned on TCM and caught the last half hour of a film I’d seen before, The Unfaithful (1947). I was pleased because it has one of my favorite actors of that period, Zachary Scott. (This fine actor really needs to be remembered for his body of work, especially in Jean Renoir’s The Southerner). The other lead was the “Oomph Girl,” Ann Sheridan.

The plot: Bob Hunter (Scott) and Chris Hunter (Sheridan) are a happily married couple. One night, when Bob is away on business, Chris kills an intruder in their home. Self-defense, right?

What no one knows (at first) is that the intruder was a man with whom Chris had a one-night tryst during the war. She and Bob had been married only a short while before Bob went off to fight. Lonely and anxious, without letters from Bob, Chris found solace in this man’s arms. She felt guilty about it ever since.

Well, the truth comes out, and Bob is stunned, hurt, outraged. He demands a divorce. Chris pours out her heart to him, admitting the wrong, needing him to understand, wanting to stay married. But Bob remains resolute. Chris accepts the inevitable.

With the secret out that Chris knew the victim, she is tried for murder. But through the fine job done by family friend and lawyer Larry Hannaford (Lew Ayers), she is acquitted. (Let’s hear it for lawyers!)

Bob is still firm about the divorce. He goes to see another family friend, Paula (Eve Arden, who made a career out of playing the good-hearted pal). Paula delivers some plain talk to Bob. Almost like a slap in the face. She tells him about women during the war, how frightening and lonely it all was, especially when no letters came. And aren’t we all human? Don’t we all make mistakes? And are you going to hold on to this bitterness forever?

Bob goes back to his house as Chris is coming down the stairs, her bag packed. Bob asks her what her rush is. Maybe they could talk awhile. Discuss how to split up the property (he’s clearly wanting her to stay so they can reconcile.)

Chris, however, has accepted the divorce and closed off her emotions.

Now it’s time for family friend and lawyer Hannaford to be the voice of reason. (Let’s hear it for lawyers!) He makes a plea for the two of them not to throw away what they have. He leaves telling them this is one case he won’t mind not getting.

Bob sits next to Chris on the sofa and, in a typical 1940s gesture of impending reconciliation, offers his wife a cigarette. She takes it.

And I thought, Nicely done. Because the film utilizes a very helpful tool of the craft—the courage to change motivator.

When a character has to go into pitched battle—physically or professionally or psychologically—he is taking a step that requires courage. We need to see what it is that helps the character overcome the natural fear that occurs when facing such a challenge.

In Bob Hunter’s case, his step is psychological. He has to be willing to put aside the blow to his male ego, admit he’s been wrong in his vindictiveness, forgive his wife, and work at saving the marriage. If he suddenly changed at the end, without any preparation for it, we’d feel a bit cheated. We need to know why he’s taking this step.

So the screenwriters (one of whom was the famous noir novelist David Goodis) gave Bob a “voice of conscience.” That was Eve Arden’s character. By giving Bob a good, old-fashioned talking-to, we are set up to accept his change of heart.

This voice of conscience needs to be someone who is credible, wise, trustworthy. In many movies—mostly from the 30s and 40s—this is a voice from the past (which is set up in Act 1). At a crucial point in Act 3, the Lead hears that voice in his head as he’s walking down the street in torment, e.g., his mothers’ voice saying, Johnny, don’t do it! Once you do it, you’ll do it again, and then you’ll be bad. Don’t break my heart, Johnny!

Then Johnny hears the voice of his parish priest (Irish accent, of course): Don’t do it, Johnny! You’ll break your poor mother’s heart!

Finally, the voice of Johnny’s brother who was gunned down by mobsters in Act 2: You’re nothing but a crumb, Johnny. That’s all you’ll ever be, you hear me? A stinkin’ lousy crumb!

Shortly after this sequence, Johnny will take the courageous step to do the right thing. And we accept it, because we know what motivated the change.

The motivation must be strong: coming from a source the Lead trusts and loves.

The motivation must be clear: there is no doubt about the source (to the Lead and to the audience).

The motivation can be a voice of conscience, or it can be invested in a physical item.

An example of the latter comes from the great Bette Davis film, Now, Voyager (1942). Davis plays Charlotte Vale, the withdrawn, unattractive daughter of a steely, upper-crust matriarch. This mother has dominated Charlotte all her life, convincing her she has nothing to offer the world.

After a nervous breakdown, Charlotte is sent to a sanitarium run by the good Dr. Jaquith (Claude Rains). Charlotte reaches a point where she is ready to take a major step—going on an ocean cruise. This will require her mixing with people socially for the first time.

On the cruise she meets a man named Jerry (Paul Henreid), who is traveling alone (he is unhappily married). Jerry sees the “real” Charlotte, and the two fall in love. Ah, but they know they must part. Jerry gives Charlotte a bunch of camellias before they do.

Charlotte finally comes home to face her domineering mother. And boy, does the mother (the great character actress, Gladys Cooper) try to smash Charlotte right back to where she was before.

This is the key moment (the “mirror moment”) for Charlotte. She is thinking, can I possibly stand up to my mother? She’s too powerful! Will I go back to being the old Charlotte again?

If only there was something to give her the courage to … well, have a look:

Camellias! This emotional association is enough to give Charlotte the courage to stand up to her mother.

… when you get to a point in your manuscript where your protagonist must take a major step, one that requires courage, provide a boost via a voice of conscience, or an item of emotional significance. This boost is most helpful sometime after—or simultaneously with—the mirror moment. Or during the final battle at the end of the book.

Characters exercising strength of will, to confront challenges and transform as a result. That’s what a novel is really all about.

Give them the courage to change.