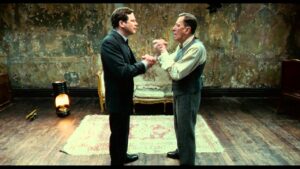 Colin Firth and Geoffrey Rush in The King’s Speech

Imagine a hungry young screenwriter getting invited to a pitch session on a studio lot.

“What’ve you got for me, kid?” the producer says.

“Okay,” the screenwriter says, “we have this guy, see, he’s a king, see, and he’s got to make a speech. Only the guy stutters.”

And yet The King’s Speech (2010) won Oscars for Best Picture, Actor, Director, and Screenwriter. How did they pull that off?

Through the power of character bonding and the magic of story structure. You can do just about anything with your novel so long as you have a reader intensely and emotionally invested in your Lead and put him through the beats of a well-crafted tale.

Let’s talk about emotional investment first. In Plot & Structure I discuss various ways a writer can join reader and character in the bonds of holy storytelling. One of the strongest bonding agents is hardship—at the beginning we are introduced to a character who faces a physical or emotional challenge.

In The King’s Speech, the hardship is both physical and psychological. Prince Albert, the Duke of York (Colin Firth) has a severe stammer which not only prevents him from delivering a simple speech; it also keeps him locked in a prison of self-doubt.

As the movie opens we see Albert nervously stepping up to a microphone to speak to a crowd. His stuttering talk bombs. People look embarrassed and disappointed. Prince Albert’s hardship has caused him massive public humiliation.

We’ve all been embarrassed, though not on so grand a scale. So we have immediate sympathy.

But that’s not all. There’s another powerful bonding agent I call the Care Package. This is a relationship in place before the story begins, showing that the Lead is not merely self interested. If we see someone who cares about someone else, it gives us hope for his ultimate redemption.

Early in Act 1 there is a lovely scene that gets me every time. Prince Albert, all done up in a tux, comes to say good-night to his two daughters. They want a story! “Can’t I be a penguin instead?” he asks. Clearly, he doubts even his ability to tell his children a simple bedtime tale. But they insist!

And so, out of love and fatherly duty, he makes the attempt. He tells a story about two princesses whose papa was changed by a witch into a penguin. This made him sad, for a penguin does not have arms to embrace his children. Not only that, the witch banished him to the South Pole. It’s obvious he is talking, metaphorically, about himself. The story ends with a restored father hugging his daughters. We can’t help but wonder if Albert will be healed, too. By now we hope so, because we are firmly invested in him.

The Duchess (Helena Bonham Carter) arranges a meeting for Albert with an eccentric speech therapist named Lionel Logue (Geoffrey Rush). Here we get another structural beat: The Argument Against Transformation. Unconvinced Lionel can help him, Albert is about to leave when Lionel asks him to try something. He puts headphones on the prince and plays classical music while having the prince read the famous soliloquy from Hamlet. After a minute or so Albert rips off the headphones and shouts, “Hopeless!” Then: “Thank you, Doctor. I don’t…feel this is for me.”

This sets up the arc of transformation that pays off at the end. (In Casablanca, Rick argues against his ultimate transformation by saying, “I stick my neck out for nobody.” At the end, of course, he does that very thing.)

The First Doorway of No Return

In a movie we need to get into the death stakes of Act 2 by the 25% mark (for novels, I advise 20% at the latest). That happens when the Lead is forced—either physically or emotionally—through a doorway that slams shut behind him (meaning he can never go back to his ordinary world). In The Wizard of Oz and Gone With the Wind, it’s physical (a tornado and the start of the Civil War, respectively). In Casablanca, it’s emotional (the arrival of Rick’s lost love, Ilsa).

In The King’s Speech, Albert is emotionally thrust through the doorway by his domineering father, King George V. Sitting his son down in front of microphones he says, “With your older brother shirking his duties, you’re going to have to do a lot more of this.”

Albert tries, but can’t get started. “Do it!” the king demands.

Later, in emotional torment over what he must be—and firmly believes he can never be—Albert puts on the recording Lionel made. And to his astonishment he’s read the soliloquy perfectly. Now he must place his trust in Lionel or “die” inside by letting down his entire country.

In the dead center of great stories the Lead is forced to look at himself, as if in a mirror (usually metaphorical, but it’s amazing how often there’s a physical mirror involved). Sometimes this is caused by another character forcing the issue.

That’s what happens in the middle of The King’s Speech. Albert is terrified at the prospect of being king (which will happen soon, for his brother is going to marry a divorcee). Lionel knows this fear is what’s holding Albert back as a speaker, a royal, and a person.

Lionel: I’m trying to get you to realize you needn’t be governed by fear.

Albert: I’ve had enough of this.

Lionel: What are you so afraid of?

Lionel: Why did you come to me? You’re not some middle-class banker who wants elocution lessons so you can chitchat.

Albert: Don’t attempt to instruct me on my duties! I am the son of a … king.

And the brother of a king.

Albert: You’re the disappointing son of a brewer. A jumped-up jackeroo from the outback. You’re a nobody!

That last line is a knife through Lionel’s heart. In Casablanca, the same thing happens when Rick basically calls Ilsa a whore. Both Rick and Albert must now “look at themselves” and wonder, “Is this who I have become? Is this who I will always be?” (In film, these thoughts are rendered visually; in a novel, you can also use interior monologue.)

To get into Act 3, where the final battle takes place, we need another doorway. It’s going to be a clue or discovery, or a major crisis or setback—something that makes the ending possible and/or inevitable.

In The King’s Speech it’s a major crisis: Hitler invades Poland. A state of war exists. And Albert has just been crowned King George VI! Now it is his duty to address his kingdom, and in such a way as to inspire iron resolve for what is coming.

Just before the climax, the Lead takes inspiration from an emotional jolt, giving him the courage to fight. I call this The Q Factor (named after the Bond character who sets up in Act 1 the gadgets Bond will need to escape in Act 3). In story structure, it’s an emotional connection that pays off by providing the last bit of courage the Lead needs. In Star Wars, for example, Luke hears the voice of his beloved mentor, Obi-Wan Kenobe, reminding him to “use The Force.”

In The King’s Speech, just as Albert steps to the microphone, Lionel tells him, “Say it to me, as a friend.” Not simply a teacher, a friend! That trust which began in Act 1 now enables the victory as Albert delivers an inspirational speech. The movie ends by proving the transformation: Albert—King George VI—steps out on the balcony with his wife and daughters and confidently waves to the adoring crowd.

Character bonding, the right structural beats (and great acting!)—that’s how a movie about a man who stutters became a huge, award-winning hit. (I discuss the fourteen super structure beats in my book of the same name. End of commercial!)

Either way, they are here to help. Because, after all, story and structure absolutely love each other!