We had quite a deluge recently in L.A. The good news is we’re out of drought conditions. The bad news is that mudslides and traffic accidents had their predictable increases. Also, a 40-foot sinkhole on a major street opened like the jaws of a subterranean monster, swallowing two vehicles. As reported on local news Channel 5:

A mother and her teen daughter had to be rescued and taken to the hospital Monday night after their Nissan, along with a pickup truck, fell inside the sinkhole.

The passengers in the pickup were able to escape their vehicle uninjured, but the truck landed on top of the Nissan, trapping the woman and the teen.

It took first responders with the Los Angeles Fire Department, Los Angeles County Fire and Ventura Fire about an hour to pull the mother and daughter from the sinkhole in a dangerous rescue operation.

“It was a dynamic rescue,” LAFD Cpt. Erik Scott said. “The cars were shifting, moving. Firefighters did an outstanding job with the calculated rescue. We lowered ladders and ultimately did what we call a high angle rope rescue where we had our big aerial ladder truck, lower a firefighter on a rope, secure a harness, lift those people to safety.” 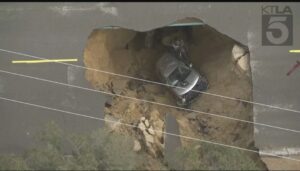 Thank God no one was seriously injured. And since I can’t turn off my metaphor machine, I found myself thinking about another kind of sinkhole—fiction blunders that can bring the reading experience to a dead stop. Such as:

A quirky, even interesting, Lead character can quickly wear out his welcome if he goes unchallenged by a little thing I like to call plot. Unless that character faces some trouble, and soon, I’m not likely to wait around. (Sorry fans of A Confederacy of Dunces, but I tried three times to get into this book, and the over-quirked and obnoxious Lead who just roams around whining and jabbering sank me every time.)

Think about another annoying Lead—Scarlett O’Hara. When we first meet her, she’s sitting on her porch flirting with the Tarleton twins. A couple pages of this and we’re almost ready to move on, until…a disturbance. The first sign of trouble for Scarlett—Ashley is going to marry Melanie! That leads to her plan to corner Ashley at the barbecue at Twelve Oaks, which becomes an argument, which leads Ashley storming out, thence to Scarlett throwing a china bowl at the fireplace…at which the voice of Rhett Butler comes from the sofa, “This is too much.”

Three pages later, Charles Hamilton tells her the war has started, and in his clumsy way asks her to marry him. To spite Ashley, she says yes. Hoo boy, is she ever going to have trouble now.

JSB Sinkhole Avoidance Technique #1: Give a disturbance on the opening page, even a subtle one, to shake the Lead out of her placid existence. Then start to pile on the troubles.

It is not until the Lead is forced into the confrontation of Act 2 that full engagement is realized and the main plot begins. Dorothy has immediate trouble with Miss Gulch, who takes Toto away. But it’s not until the twister dumps her in Oz that the story proper begins.

JSB Sinkhole Avoidance Technique #2: Push your Lead through the Doorway of No Return (what some call Plot Point 1) no later than 1/5 into the book (the 1/4 mark is more applicable to screenplays). In GWTW the war breaks out at the 20% mark. (I’m amused at how Margaret Mitchell keeps things moving. The first chapter after passing through the Doorway of No Return begins: Within two weeks Scarlett had become a wife, and within two months more she was a widow. So much for Charles! Let’s move on to Rhett.)

I’ve written here before about death stakes. Unless the conflict is a life-and-death struggle, the plot will not engage as it should.

Now, there are three kinds of death. Physical (an obvious one for thrillers), professional, and psychological. Your novel needs one of these as primary. The others can be added below the surface.

For example, Harry Bosch faces all three at one time or another in the Michael Connelly series. I would argue that the primary in most of the books is psychological. For Bosch, his employment as a cop is often on the line (professional) but he is obsessed with cold cases and seemingly “unimportant” victims. “Everybody counts or nobody counts,” he tells a police psychologist in The Last Coyote. “That’s it. It means I bust my ass to make a case whether it’s a prostitute or the mayor’s wife. That’s my rule.” Why? Because his mother, a prostitute, was murdered when he was eleven, and the case went unsolved. To keep from dying inside (psychological death) Bosch gives his all to the forgotten victims.

JSB Sinkhole Avoidance Technique #3: Brainstorm all three types of death for your Lead. Not all may apply, but it’s a good exercise. For example, in a cozy mystery professional (or vocational) death for the sleuth is usually the primary. Miss Marple is faced with a seemingly intractable mystery. Usually there’s not someone out trying to kill her (though maybe that was in a book or two, I don’t know). You, perhaps, might find it a nice way to up the stakes in your cozy.

Avoiding speed bumps, potholes, and sinkholes is part of our craft. And if I may offer a commercial to help in this regard, consider 27 Fiction Writing Blunders – And How Not To Make Them and Plotman to the Rescue: A Troubleshooting Guide to Fixing Your Toughest Plot Problems. I’m here to help.

Any other sinkholes you spot in fiction?

And please drive safe, especially in the rain. 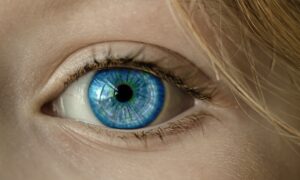 She put one hand behind her and flipped the snap of her halter and tossed it to the floor, staring at him with eyes of liquid smoke in which there was a curious and great disinterest. – From Here to Eternity by James Jones

Eyes. Windows to the soul. “Traitors of the heart,” Thomas Wyatt put it. He would know. He was accused of ruffling the sheets with Anne Boleyn and got to write his poems in the Tower.

So yes, eyes are important. We look people in the eye when we meet them. (If someone doesn’t look at your eyes when they meet you, watch your back!)

It’s the same with characters, isn’t it? The reader forms a picture of a character—eyes included—whether you choose to describe them or not.

So the first decision you make is whether to include orb details at all. My own preference is to describe them for major and strong secondary characters. Most minor characters and “spear carriers” (those little one-offs needed for a scene, like a waiter or doorman) usually don’t need them.

Once we decide to describe the eyes, we usually first think of color. Something along the lines of She had blue eyes and wore a yellow dress. Functional but not memorable. More lush is Margaret Mithcell’s famous opening to Gone With the Wind:

Scarlett O’Hara was not beautiful, but men seldom realized it when caught by her charm as the Tarleton twins were. In her face were too sharply blended the delicate features of her mother, a Coast aristocracy of French descent, and the heavy ones of her florid Irish father. But it was an arresting face, pointed of chin, square of jaw. Her eyes were pale green without a touch of hazel, starred with bristly black lashes and slightly tilted at the ends.

(Note: those green peepers were so important to fans of the book that when blue-eyed Vivien Leigh was cast as Scarlett for the movie, there was an uproar. Producer David O. Selznick took care of that by having yellow lights trained on Leigh’s face in closeups, turning blue to green.)

You can add to the color by including the effect the eyes have on the viewpoint character, as in Richard Prather’s noir story “The Double Take”—

Her eyes were an incredibly light electric blue—shooting sparks at me.

Similar is the description of Hannibal Lecter in The Silence of the Lambs:

Dr. Lecter’s eyes are maroon and they reflect the light in pinpoints of red. Sometimes the points of light seem to fly like sparks to his center. His eyes held Starling whole.

David Copperfield describes the first time he saw the face of Uriah Heep:

It belonged to a red-haired person—a youth of fifteen, as I take it now, but looking much older—whose hair was cropped as close as the closest stubble; who had hardly any eyebrows, and no eyelashes, and eyes of a red-brown, so unsheltered and unshaded, that I remember wondering how he went to sleep.

While color is our natural default when describing eyes, it’s not a requirement. A popular alternative is metaphor.

His eyes were wet wounded rugs.
(Revenge of the Lawn by Richard Brautigan)

He hadn’t shaved for four or five days. His nose was pinched. And his eyes were like holes poked in a snowbank. (The Long Goodbye by Raymond Chandler)

I’ve been in front of X-ray machines that didn’t get as close to the bone as that woman’s eyes. (The Name of the Game is Death by Dan J. Marlowe)

She had a lot of face and chin. She had pewter-colored hair set in a ruthless permanent, a hard beak and large moist eyes with the sympathetic expression of wet stones. (The High Window by Raymond Chandler)

Richard Matheson’s famous Sci-Fi story “Lover When You’re Near Me” takes place in the distant future on a colonized planet inhabited by creatures called Gnees.

He sat there, momentarily reflecting on her eyes. They were huge eyes, covering a full third of her face; like big glass saucers with dark cup rings for pupils. And they were moist; bowls of liquid.

I’m saving the best for last. Here is an eye description I’ve never forgotten, so perfectly did it capture a character. It’s from Darker Than Amber by the great John D. MacDonald:

The eyes have it—perhaps more than any other descriptive element they can give us a sense of who the character is and what mysteries dwell within. Use color, metaphor, and/or the effect the eyes have on the viewpoint character, and your fiction will be looking good.

How do you go about describing the eyes of your characters?