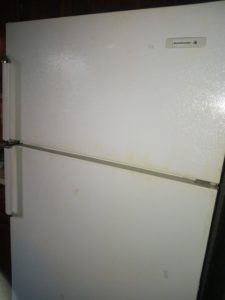 Sometimes I sits and thinks, and sometimes I just sits…and sometimes I write. I am doing the latter while waiting for Kelvin, our venerable refrigerator, to be hauled away. Kelvin lasted a long time, taking the blame for disappearing food (“Who ate the last pork chop?” “Kelvinator!”) for two decades and change. It is the last original major appliance in the Hartlaub House of Hoo-Ha to give up the ghost. I bought it and this house twenty-two years ago — July 1, 1994 — when I was a single dad with three children. Four days after I moved myself and my brood into this residence and started making it a home a company named “Amazon” started in Seattle, Washington, with the goal of being the world’s largest bookstore. The new refrigerator wasn’t purchased from Amazon, but it could have been.

I won’t try to list all or even a few of the things that have happened in the world since Kelvin was pressed into service. I’ll tell you a few of the things that have happened to me. They were all surprises. I remarried. I had a fourth child. I’ve had stories published, had a supporting role in a feature film (which you all may yet see in 2017), changed my field of law practice, written some book reviews for bookreporter.com (which didn’t exist in 1994 either), and acquired a whole bunch of new friends (and yes, maybe a couple of enemies too!). Kelvin was a part of a bit of all of that, and it’s going to somewhat of a somber moment when the truck pulls up to haul it away, to be replaced by what more likely than not will be my last refrigerator, particularly if the new one lasts as long as the old one did.

“Somber” for me has usually been followed by “pensive.” It would be easy as the old year ends and a new one begins to reflexively list my New Year’s resolutions, and ask you to share yours as well. Instead, I’m going to ask you: what is it that you don’t want to do in 2017? Mine is easy to state, and hard to do, particularly because it soooo easy in my case to use age an excuse to do otherwise. I’m going to try however, to follow this rule: Don’t. Screw. Up. Now let’s see yours.

Merry Christmas, Happy Hanukkah, and Happy New Year! Be safe. We’ll see you on the other side of the New Year.