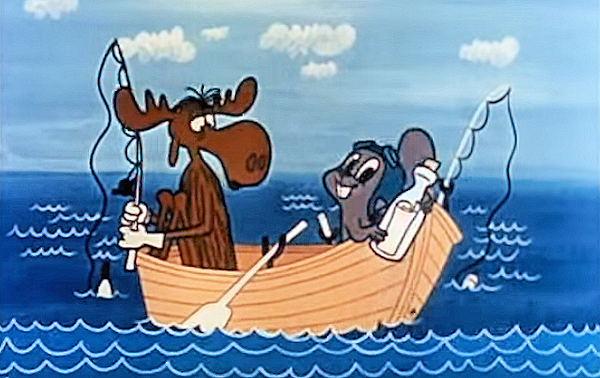 One of the best things about being a published writer is getting mail.  Your day can be going to hell in a hand basket, your work in progress making none. And then you get an email from a reader.  It’s like a tonic.  Or, sometimes, after you read it, you need a gin and tonic.

Back in my salad days as a romance writer, before we had the internet machine and even before computers, I used to get real paper letters, written in long-hand. I took a class in handwriting analysis and it came in handy in trying to figure out my letter writer’s personality or mood.  I never got anything written in red crayon or worse. Mostly, readers were kind, supportive and, when I screwed something up, pretty forgiving.

Now, all we get are emails. Something has been lost in this process. I can’t discern the personality behind the letter anymore. Alas. Not all technological advances are good. Still, even emails can brighten my day.  Here’s a sample of some I got this week:

Is there anything new coming out soon for Louis. I have read them all. I getting withdrawals. I have loved them all. Benny

Hi, hope you are both enjoying writing another story for Louis to work his way through.

Thank you for all of your wondrous stories, which I have read over and over, and probably will get to again one day. God bless you both and may you keep on bring him and Joe to life for those of us who love them. Most Sincerely, Sheryl

And then there was this one:

I enjoy Louis Kincaid immensely. However, in the interest of authenticity, I feel the need to share a couple of disagreements in dialectic choices…in several places in the book, you used the word “kin” to describe relatives. In my experience as a 64 year old woman who has been a Michigander most of her life, (third generation), I have to say that I have never heard relations referred to in that way, except by southern transplants who came up for the auto industry jobs, in the middle and eastern part of the state. We, and everyone we knew, said “family” as in, “I have family in Michigan.” I know these are small details that may seem inconsequential, but they felt jarring to me and definitely took me out of the rhythm of the story.

Today, I got a really strange email. First thing, he identified himself as a professor at Ohio University Athens. Rut-roh. What grammar rule did I violate now? What lousy syntax did I use this time? Did I screw up my geography again?

I read on and breathed a sigh of relief. I was off the hook. And this one was really interesting.

Dear Ms. Montee. Forgive me for writing you out of the blue, but I am hoping you will agree to help me with a project I am working on this summer. I am producing a podcast about the life and work of the Austrian polymath Robert Eisler. This podcast is based on a biographical afterword I wrote for an Italian translation Eisler’s Man into Wolf (which appears in your novel Island of Bones), published by Adelphi Edizioni earlier this month. Part of the podcast will consist of conversations about how Eisler’s ideas have affected the work and thought of others. Is there some story of how you discovered Man into Wolf? 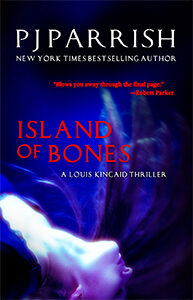 The book he is referring to is one of my favorites, not just for its convoluted plot but for the strange rabbit holes our research took us deep into. Like many books, this one started out with a “what if?”

About 15 years ago, Kelly and I were manning the card table at a Fort Myers Barnes & Noble signing and we weren’t exactly busy with a long line snaking out the doors. We used the time to brainstorm about the next book, but all of our ideas stunk.  Then a nice lady came up and in talking, we learned she was a sociologist writing a non-fiction book about the pressures exerted on large extended families forced to live together.

“Sometimes, they just can’t take it. They flip out,” she said.

That was the germ for ISLAND OF BONES.  We knew it had to be set on Southwest Florida’s coast, and that place has a wonderful geography.  Off the coastline are dozens of little islands, squatting out there in the Gulf like green turtles.  Some are privately owned.  What if...there was a weird family living on an island out there that had a dark secret?

Then I remembered one of my favorite songs by the J. Geils Band called “Monkey Island.”  Here’s the first verse:

No one could explain it
What went on that night
How every living thing
Just dropped out of sight
We watched them take the bodies
And row them back to shore
Nothing like that ever
Happened here before.

Oh yeah. A strange landscape. An isolated island. A family maybe going a little insane. I had heard of a rustic restaurant out on a private island in the Gulf so Kelly and I took the ferry over one day to check it out.  Yes…now we were beginning to see it. Here’s the second verse of “Monkey Island.”

On the east side of the island
Not too far from the shore
There stood the old house
Of fifty years or more
All the doors and windows
Were locked inside and out
The fate of those trapped in there
Would never be found out.

Because of Florida’s unique history, we knew our family had to be of Spanish origin, so we came up with the island’s name — Isla de Huesos, Spanish for island of bones. But over the centuries, the original name was lost, corrupted by the locals  into Away So Far Island. And the weird old family out there was left to do whatever it was they did.

Now comes the last piece of serendipity.  While we were plotting this book, I was scheduled for a long-planned trip to Spain. So off I went to Madrid. My husband and I are seat-of-the-pants travelers, so we just rented a car and headed north. We ended up, by happenstance, in a coastal region called Asturias. It’s gorgeous and mysterious, isolated between the Picos de Europa Mountains and the sea.  I knew I had found my family’s mother home.

When I returned home, I dove into the research rabbit hole. Asturias was influenced by the Celts and Romans and remains stubbornly isolated and rich in old traditions. Some of their ancient customs still survive in the villages today.  One of them is called the Beleno Ride. The village men go up into the mountains, put on wolf skins then ride down into the villages, simulating the abduction and rape of women. The custom comes from Roman times and is related to the pagan Lupercalia festival.

But I didn’t want to go into woo-woo werewolf territory, and the psychology of criminals fascinated me. So I pulled a couple more loose research threads, trying to figure out why these Asturian men still do this. Deep in Google, I found Dr. Robert Eisler.

Eisler was a renaissance man. He lectured on economics, philosophy, religion, art history, and philology, spent fifteen months in Dachau and Buchenwald, was once arrested for art theft in Italy, testified at hearings on currency reform in front of the British Parliament and U.S. Senate, and never held any university position beyond temporary lectureships at Oxford and the Sorbonne. 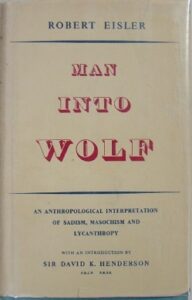 And he wrote a book in 1951 called Man Into Wolf. The subtitle tells you everything any writer needed to know: “An Anthropological Interpretation of Sadism, Masochism and Lycanthropy.”  Basically, Eisler believed that human urge to violence stems from Ice Age food shortages that forced ape-men to imitate wolves and take up pack hunting. He claims this is the historical basis of the werewolf legends found in many cultures.

I ordered the book from Alibris and read it. Louis finds it on the shelf of his prime suspect and his pursuit of the “wolf man” leads him right to the Island of Bones.

My Ohio professor, Brian, and I have exchanged several emails. Turns out he’s a big fan of crime fiction and read our book. We did a phone interview a couple days ago for his podcast and ended up chatting far longer than we meant to. Interesting postscript Brian told me: In Man Into Wolf, Dr. Robert Eisler used the term “serial killer.”  Which is a good 55 years before it is credited to FBI profiler Robert Ressler.

Cue a little woo-woo music. Or maybe some Warren Zevon.

Special credit to the first person who can tell why I used that photo of Rocky and Bullwinkle.