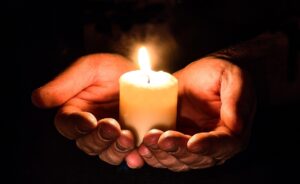 As if things weren’t bad enough.

We’re struggling through this national shutdown and all the dire consequences thereof, and along comes exactly what we don’t need: The murder hornet!

Yes, this unsightly wasp with its ugly orange head and relatively large body mass, has arrived on our shores intent on killing innocent little honey bees and, indeed, the occasional human.

But just when we think we are in the midst of a Stephen King nightmare, along comes a hero, a savior, a defender of all that is good and decent and pure: the praying mantis!

How appropriate that the vanquisher of a grotesque insect villain should turn out to be an insect of another sort—one that humbly supplicates to the Creator before chomping the brains of its adversary.

Which is what mystery, suspense, and thrillers are all about. They take us through the valley of the shadow of death, toward the light on the other side.

At least, the best ones do.

That’s been the secret of the popularity of this kind of fiction since it took off in the nineteenth century. Most scholars agree that the modern mystery story can be traced to Poe’s “The Murders in the Rue Morgue” (1841). Here is the invention of the sleuth who, through the powers of observation and deduction, solves a seemingly inexplicable crime.

Which offers hope to a population that must believe, “Crime doesn’t pay.”

Sir Arthur Conan Doyle took it to the next level with the invention of Sherlock Holmes. Holmes endures, even today, not simply because of his brainpower, but because of his eccentricities. He’s entertaining as well as brilliant. He’s flawed, too, just like us. But again we see the hope that deduction brings—justice will be done.

Back here in America we took the simple mystery and transformed it through the hardboiled school of the pulps. The quintessential detective hero of this type issued from the typewriter of Dashiell Hammett: Sam Spade in The Maltese Falcon (1930). This hero is not refined or dainty or a tea drinker. He is tough, cynical, sometimes brutal. But in the end he still gets justice. The mystery of the black bird is solved, but more importantly each of the nefarious characters Spade has dealt with get their comeuppance, including the femme fatale Spade has fallen in love with, Brigid O’Shaughnessy. Spade “sends her over” because, after all, she killed his partner. Spade tries to explain it to her: “When a man’s partner is killed he’s supposed to do something about it. It doesn’t make any difference what you thought of him. He was your partner and you’re supposed to do something about it.”

Underneath his contradictions, Sam Spade is still guided by a moral code.

In the detective pantheon, Spade was followed by Raymond Chandler’s Philip Marlowe. Marlowe, like Spade, is tough and cynical (but a lot more fun to listen to) and has a code based on honor. Indeed, in Chandler’s world, Marlowe is something of knight errant in a fedora. Chandler made this plain in his 1944 essay, “The Simple Art of Murder.” Here is the famous passage:

But down these mean streets a man must go who is not himself mean, who is neither tarnished nor afraid. The detective in this kind of story must be such a man. He is the hero, he is everything. He must be a complete man and a common man and yet an unusual man. He must be, to use a rather weathered phrase, a man of honor, by instinct, by inevitability, without thought of it, and certainly without saying it. He must be the best man in his world and; a good enough man for any world.

As Professor David Schmid puts it in his course on mystery and suspense fiction:

Chandler’s essay helps us understand that hard-boiled mysteries appeal to the reader both because of their unvarnished, realistic cynicism and also because their private-eye protagonists embody an alternative to that cynicism, an oasis of personal responsibility and integrity in a world that is sorely in need of both.

The world is always in need of the heroic vision. The best thriller, mystery, and suspense novels offer that to us. No matter how mean the streets, or dark the night, justice, even if rough, somehow prevails through the strength and courage of the hero.

Yes, there is a type of novel that begins and ends in the darkness—noir. For example, the world of Jim Thompson (e.g., The Killer Inside Me; Savage Night) is not your grandmother’s cozy little village. Yet even as his grifters and psychopaths meet their ends, there is a rough noir-justice being doled out. While it isn’t a hero who “solves” things, there is a price to pay for the criminal choices made.This type of novel provides what Aristotle called catharsis. We see the consequences of an immoral life and thus are instructed not to go there. Thus, even dark noir can have a candlelight’s flame of moral illumination.

All this to say that the lasting popularity of mystery, suspense, and thrillers is based primarily on a hero bringing us justice, re-enforcing our belief that good will prevail and that light will shine again. As Dr. Schmid says at the end of his course:

Although experimental examples of mystery and suspense fiction may be well respected as aesthetic objects, they aren’t popular with wide audiences. In the final analysis, it seems that we can tolerate only so much experimentation and frustration. Perhaps the ultimate secret to great mystery and suspense fiction is that, in one way or another, it satisfies a deep-seated desire we all have for the world around us to make sense.

Isn’t that why you continue to read this kind of fiction? In a world that increasingly isn’t making sense, don’t we need these books more than ever?