The legendary movie director John Huston once remarked that a great movie is comprised of “three great scenes, and no weak ones.” Not bad advice that. We don’t want any weak scenes in our fiction. But we also want those moments that reach deep into the reader’s heart. 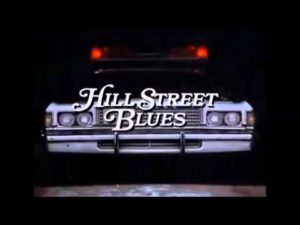 I thought about this recently while watching an early episode of the old cop drama Hill Street Blues.

I didn’t watch the show religiously when it first aired, as it began the same year I started law school. I was kind of busy. What I do remember is how much I liked the central character, Francis Xavier “Frank” Furillo, played by Daniel J. Travanti. He was the right mix of tough and compassionate, and Travanti was perfect in the role.

A few weeks ago I ran across a channel specializing in vintage cop shows and started watching an episode of HSB. It was a two-parter titled “Jungle Madness.” The show had several plot lines, one involving John “J.D.” LaRue (Kiel Martin) as a cop going down the drain due to alcoholism. In Part 1, LaRue’s drinking causes an incident that might have gotten him killed. Furillo takes him aside and gets in his face. “You’re a drunk!” he says, and tells him he either admits this to a police doctor or he’ll be drummed off the force.

In Part 2, LaRue hits bottom. No money. Kicked out of bars. Alone.

At episode’s end he nervously walks into an AA meeting. The leader asks if there are any newcomers. Slowly, LaRue raises his hand. The leader asks him to please stand and tell everyone his first name.

Astonished, LaRue looks over and sees … Captain Furillo. And the twist of this tough captain being there, an alcoholic himself, was a totally unexpected heart punch. The expression on Travanti’s face was acting perfection. I’m going to admit it—the waterworks turned on.

We love moments like that, don’t we? So how can we create them for our readers?

Brainstorm. Before I write, even before I outline extensively, I do an exercise I call “killer scenes.” I take a bunch of 3 x 5 cards to a coffee house, tank up, and start jotting random scene ideas for my plot-to-be. I don’t think about how they connect or if I’ll even use them. But when I’m done I’ve got a stack of scene ideas, some of which I hope will become stunningly memorable.

Use music. On iTunes I have a library of mood music, mostly drawn from movie soundtracks. There is music to inspire action, suspense, heart tugs and so on. Music brings out emotions in us, which vibrate the imagination. My most perfect ending—to both book and trilogy—is probably in Try Fear. And it came to mind as I was listening to the Beatles song “I Will.” To find out why it worked, you’ll have to read the books (heh heh).

Listen to a character. We’ve all had the experience of a character doing something unanticipated in a scene (or at least wanting to, which starts an argument with the author). Well, give the character a fair hearing and if you get persuaded, put it in. I once had a wife who was supposed to get out of town because her husband was in jeopardy. I had her trip all planned. But she refused to leave. And it was the right move.

Re-work scenes in subsequent drafts. Your first draft will have some scenes that work and others that need to be cut or revised. Any scene that has potential can be improved. Up the emotion in the characters. Improve the dialogue.

I will never forget that scene at the AA meeting in Hill Street Blues. If you’d like to see the episode, it’s on YouTube (the AA meeting starts at the 37:40 mark).

What’s a memorable moment you recall from a movie or book?