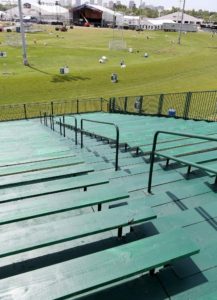 One more story, offered with the hope of sparking inspriration. There is nothing odd or supernatural about this one. It’s ironic and tragic, but there’s some justice, too. Bear with me.

The annual New Orleans Jazz & Heritage Festival takes place over the last weekend in April and the first weekend in May, just as spring is beginning to heat up the city. The event is held at the New Orleans Fairgrounds — known as “The Derby” by the city’s residents due to the horse races which occur there — which is in the middle of the Gentilly neighborhood, a relative stable working class area, at least by New Orleans standards. The track during Jazzfest is given over to several stages at various points, each of which feature live music being performed over the course of several hours. There are also merchandise and food vendors — come for the music, stay for the eats — and various places to take a break from the energy of the event, including a set of bleachers off to one side the track.

I attended my first Jazzfest in 2000. I got there early on opening day and after seeing a few acts that I had waited all of my life to see (Clarence “Frogman” Henry, The Dixie Cups, and my now-deceased pal Frankie Ford)  I took a mid-afternoon break. I got a shrimp po’boy and, dislike of heights notwithstanding, got a seat near the top of one of the sets of bleachers, where I proceeded to, as it’s said, fang down on lunch and watch the party swirl below and in front of me.

I was about halfway finished with my meal when a man and woman ascended the bleacher steps near me. The woman wore one of the distinctive vest-apron combinations that the Jazzfest employees customarily wear. It was a hot day, and the woman, somewhat slight in body type, appeared tired and weary, no doubt from working in the sun and humidity that day. The man, for his part, manifested the kinetic energy usually seen in the nervous or those who are “hyped” for one reason or another. His arms were corded with thick veins and ended in large hands that he bounced off his knees in an odd rhythm as he walked, sticking his elbows in and out to the side. He hummed and nodded and looked all around without appearing to see anything. The woman was carrying a styrofoam go-box similar to the one that my lunch had been in, and I assumed that she had earned it under the policy that provides a free meal for each Festival employee while on shift.

As they passed the aisle where I was seated the man grabbed the box from the woman before turning down the row of seats behind me. The woman emitted a tired but still audible “hey” in protest, one which the man ignored as he sat down behind me. I heard him proceed to eat whatever was in the box, gulping, lips smacking, and grunting all the while. The woman, after about a minute, asked him softly, “Ain’t you gonna give none of that to me?” The man stopped eating just long enough to spit out a “no” before continuing his repast. The woman waited a minute, and then said, “But they gave that to me for workin’ here.” The man made a statement to the effect that she could eat when she got off work, and that she needed to lose some weight anyhow.

I am an interventionist. I make neither excuses nor apologies for being so. If someone yells “help” or looks like they need help my impulse is to respond. My impulse to intervene in a bad situation, however, is tempered by situational awareness.  I won’t get involved if I don’t see a positive outcome, short or long term, in my actions. Some things are in the end irremediable, and intervention by a stranger can make things worse. I considered this to be one of those situations. I could have 1) give the woman money for lunch; 2) given her the rest of my lunch; or 3) told the guy that he was a miserable waste of skin for treating someone with whom he was apparently in a relationship (more on that in a moment or two) in such a manner and fashion. I also concluded, however, that any of those actions would have rebounded back on the woman sooner or later, and thus I wouldn’t be helping her. The third action would also have probably gotten me my ass kicked (not that such has ever stopped me in the past) and not just once. I have learned, via payment in dear and bitter coin, that everyone in New Orleans seems to be connected or related to someone else, so that creating a beef with one person multiplies the participants in said dispute quickly and exponentially. Additionally, I was concerned that the woman would get a beatdown in the bargain as the price of attracting the attention of a stranger. I didn’t feel good about it but I quickly finished my lunch and walked away without doing anything. And in case you are wondering…I of course never for a moment considered turning around and suddenly shoving the guy off of the bleacher seat in the hope that he would fall fifteen or so feet to the ground. That would have been wrong. I think.

Flash forward two days. I was reading the Sunday edition of the New Orleans newspaper in the lobby of my hotel when I saw a small news item buried in the nether regions of the back pages. The story concerned a man who had been killed in a domestic incident. As the story went, he and his significant other had been arguing throughout the day, starting at Jazzfest where she worked. Their argument reportedly continued after she arrived home in the evening and was apparently fueled by the man spending the afternoon fortifying himself with alcohol. The article stated that he had been upset that she was “late” and as a result beat her twice over the course of the following few hours. Having exhausted himself during his busy day, the man went into the bedroom and fell asleep. The woman used the opportunity creating by his unconsciousness to pour gasoline over him and, in her words, “I lit him up.” Indeed. The article noted that there had been a history of domestic disturbance calls to the household going back for over a year prior. The woman, however, had declined to either press or pursue charges in each incident. The article was accompanied by a mugshot of the woman who had been seated behind me.

How did things turn out? The woman was initially charged with second degree murder. I got on the phone and started calling around to the prosecutor, public defender, and an attorney I know in New Orleans who enjoys arising each day to joust at windmills on behalf of the downtrodden. I won’t bore you with the details but the upshot was that I offered to testify at trial as to what I had witnessed on that particular day,  hoping that my version of what I saw, and my reaction, would be received as evidence of mitigating circumstances. I didn’t need to, as it turned out. The woman, who did not have so much as a traffic ticket against her, pled guilty to a lesser charge and was sentenced to time served and probation. The judge, with the prosecution’s blessing, took into account her history with the deceased and the fresh evidence of his violence that night (don’t ask). That the deceased was a multiple offender with several violent crime notches on his belt — enough that he had been awarded the title of “career criminal” by the time he reached his nineteenth birthday — was not considered, of course (wink wink).

I don’t know what happened to the woman, and I never really met her. But I think of her frequently, particularly when I am woolgathering instead of sleeping. I wish her the best, wherever she is, and would tell her that I’m sorry that I couldn’t do more. But I think things turned out okay for her. God, I hope so.

What would you have done in such a situation? Have you ever been in a situation where it was better to walk away than step in and defend someone? What did you do? What was the aftermath? And as far as a starter for a novel goes…it’s a great one. Colin Harrison uses it in BODIES ELECTRIC to frightening effect and, of course there’s a series involving a guy named Jack, an ex-MP, who wanders around the country getting involved in things. What do you think?