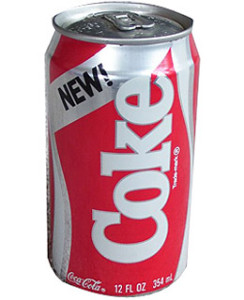 Mr. Donald Keough died this past week. He was 88 and was for a time the number two man at Coca-Cola. This was during an era called the “soda wars.” Keough’s job was to beat back the challenge of Pepsi, which was winning the younger set while Coke was out there trying to teach the world to sing in perfect harmony.

Keough was also the mastermind of one of the worst product blunders in history.

The original formula Coke (at least the one that came after they took the cocaine out of it) was, and is, the best tasting cola ever. It was Fred Astaire to Pepsi’s journeyman hoofer. It was Spencer Tracy to Pepsi’s high school senior starring in the school production of Our Town.

But for some unknown reason––probably due to overpaid consultants––Keough decided to change the formula, and “New Coke” was born. With great fanfare they rolled it out. And the country responded with a loud, collective YECCH!

So passionate was the push back that only 10 weeks later they brought the old formula back, calling it “Classic Coke.”

And sales boomed. The controversy had become national news. The publicity turned out to be priceless.

Some cynics suggested the whole thing had been planned.  If so, it was brilliant. But when asked Keough said, “We’re not that dumb and not that smart.”

Later on, with a bit of self-deprecatory wisdom, Mr. Keough wrote a book called The Ten Commandments for Business Failure. I thought they might also apply to writers, especially now that self-publishing is a viable business option for the “authorpreneur.” Let’s have a look.

Resting on your laurels. Mailing it in. Doing the same old, same old. Maybe that works for a few traditionally published and bestselling authors. But for the true writer, the one who wants to honor the craft and get better, risk taking is part of the plan. Risk in characterization and plot and style and theme. That, in turn, brings a certain excitement to the writing, and you know what? Readers can sense that you’re excited. That makes your writing more appealing.

“Flexibility,” writes Keough, “is a continual, deeply thoughtful process of examining situations and when warranted, quickly adapting to changing circumstances.” These days, every writer, no matter who butters their bread (i.e., New York or Seattle) needs to be aware of process, changes in the marketplace and distribution channels, and quality improvements.

Success in business means being in touch with both workers and customers. A good manager is one who walks around and knows what’s going on in the building and in the satellite offices.

Writers, who by the very nature of the work spend most of their time alone, need to know how to nurture a fan base, work social media wisely, grow an email list and, if contracted with a traditional house, schmooze a little with the increasingly nervous staff therein.

You want to fail at this game? Then put a chip on your shoulder and always blame somebody else. Your critique group is a great place to start. Tell them you’ve forgotten more about writing than they’ll ever know. Reject editors’ notes. Then rail at the marketplace when your books don’t sell. Do anything but admit you have weaknesses that need to be addressed.

5. Play the Game Close to the Foul Line

What Keough means by this is that cheating, even a little, will eventually catch up with you. In recent years we’ve seen instances of plagiarism and sock-puppetry snag writers and impact careers. Trust is built up over time but can be lost in an instant. Just ask Brian Williams.

The saying in business is “data drives decisions.” You have to stop doing things that don’t lead to profit and do more of the things that do. Which is why traditional publishing companies drop authors who aren’t selling enough books. If you are a midlist writer and that has happened to you, maybe it is time to think … about going indie.

For the full-time indie writer, data is available so you can see what’s selling and how certain promotional ventures pay off. You can keep on developments via many fine blogs (start with The Passive Voice, a good aggregator of publishing news).

When I was running a small business I took time each week for “thinking, planning, and studying.” I called this my “TPS time,” which must never be confused with the TPS in this clip.

7. Put All Your Faith in Experts and Outside Consultants

Writers, more than ever, need to take responsibility for their own careers, no matter what side of the walls of the Forbidden City they’re on. You cannot simply hand everything over to an agent or publisher. You have to know what questions to ask and what terms to refuse. You have to know how to limit a non-compete clause and define “out of print” in a way that is meaningful and fair.

If you self-publish, the worst thing you can do is give some outfit thousands of dollars to get your book out there, and then thousands more for them to “market” your book. You need to know how to do this yourself. You need a plan, like the one I’ve followed and put into a book, which is on special now for 99¢ (you also have to know how to spot a real bargain, and this is one of them).

In business, the bigger the organization the harder it is to move. Traditional publishing has been living this challenge for the past five years. Why only five? Because when digital publishing took off in 2008-09, the main reaction of the Bigs was to see it as a blip, nothing to worry about. They had their comfy bureaucracies.

Oops. Now we see all the changes that have been happening inside the Forbidden City, from the cutting of editorial staff, to tussles with Amazon, to new direct-to-consumer programs. It’s been a difficult transition period and it’s still going on.

The indie writer, on the other hand, can move quickly, but can also fall in love with systems that aren’t ultimately helpful. For example, if you’re spending 80% of your time on social media and 20% on your writing, you’re actually heading backwards.

10. Be Afraid of the Future

Oh, this is major. For 150 years the publishing industry has operated one way. It had a settled distribution system and there were plenty of bookstores for their stock. All that has changed in a flash, leaving agents, editors and trad-based writers wondering how this is all going to shake out. To which the answer is: no one knows. It’s like what old Carson the butler says with a sigh in a recent episode of Downton Abbey: “The nature of life is not permanence, but flux.”

So the successful writer keeps writing and doesn’t let anxiety freeze up his flying fingers. Keep writing, keep trying to get better.

11. Lose Your Passion for Work, for Life

You’ve got to find ways to keep the joy in your writing life. That doesn’t mean it’ll always be unicorns and rainbows. A lot of the time it’s tar pits and tsetse flies. But an inner core of love for what you do, and hopes for what you can achieve, will keep the fire burning.

When the flame begins to dim, take a couple of days to relax, regroup, rethink. And reread. Take a few of  your favorite novels off the shelf (or off your ereader) and look at a few chapters. Get caught up again in the romance of great storytelling. Soon enough you’ll be itching to get back to the keyboard.

So here’s today’s command: write your best scene ever. When you’re done, pour yourself a Coke … the real thing. Once in a blue moon the calories won’t hurt you!