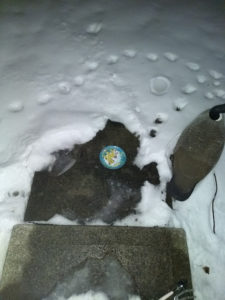 I for whatever reason am occasionally asked for advice about writing. My bottom line suggestion — one that I follow myself only after being dragged to it, kicking and screaming — is to tell the story simply. Not everyone needs to be James Lee Burke, William Faulkner, Toni Morrison or Cormac McCarthy, and they shouldn’t be. Write from Point A to Point B, at least at first. You have to build the wall before you decorate it. Get those corners at right angles and those verticals plumbed in your story before you decorate it. You’ll have plenty of time for that later. Your story or novel isn’t going anywhere unless your cat walks across the keyboard and steps on the delete button.

That brings me to an example of the foregoing.

There is a feral cat who has been coming around since late last spring. We call him “Felix.” He’s grey and skittish. His trust is measured in incremental inches, bought and paid for with food on demand. Felix disappeared for several weeks near the end of summer.  I was fairly certain that he had crawled into the brush to await the arrival of the picadors and had risen to meet them one last time. He surprised me, however, by returning near the end of October, gazing at me through the rear sliding glass door with an expression that probably translated to, “Yeah? Whaddya want from me?” He has visited regularly since. It’s been a tough winter, and I’m surprised whenever I see him, but see him I do, and almost every day.

Felix and I tell each other a story each day.  When I get up each morning I turn all of the backyard lights on. Felix always shows up within ten minutes. His arrival is heralded by Demonspawn, the resident housecat and indoor maitre ‘d. I bring the food out while Felix stands an arm’s length (mine, not his) or so away from me until I go back into the house. If he wants more, he hangs around and I give him more. We follow the same pattern at night. Sometimes I’ll see his footprints on fresh snow, weaving in the same pattern he always makes, and know that one of us missed the signal. I make it up on his next pass.

The story that Felix and I tell each other is simpler than that, however.  He tells me he’s hungry. I tell him I care. Actually, that’s the root of just about every story, from Aesop’s Fables to The Bible to The Dark Tower series and beyond. So there you go.

Simple stories aren’t just for children, but it’s during childhood that we normally hear our first ones. Are there any that you care to share?

As always, thank you for stopping by. And if you are able please take a minute to feed our friends outside. It’s a cold one this year.