Recently in the comments section of one of John G’s posts, a TKZ’er asked, “What is the best way to describe a main character in a story?”.

As tjc and John suggested, there are a few generally recognized rules you should  keep in mind when describing your protagonist:

* It’s considered cliche to have your character gaze into a mirror or something similar to deliver physical description.


* Physical descriptions of the main character are best provided from the POV of secondary characters.


A woman entered the room. She stopped and drilled me with intense blue eyes. She was in her mid-twenties, tall, thin, and blonde.


This type of a straight-on physical description right after a character’s introduction will bring your story to a grinding halt. (Note: Credit for “description dump” goes to Chris Roerden, whose excellent books about the craft of writing, including DON’T MURDER YOUR MYSTERY, deserve to be on any writer’s shelf.)


* If your main character has any specific physical traits which will be used later, make sure to spell those out up front. Otherwise, your reader may form an image of your character that clashes with later scenes. For example, if your character is particularly tall or short, old or young, that’s likely to come up in later scenes in relation to other characters. If your reader  has already formed a specific impression that doesn’t agree with your details, it’ll be jarring note.


Even though most writers are aware of these rules, it’s amazing how often they violate them. In book after book, I get irritated by an author who brings his story to a full stop every time a character is introduced. Other books, including best sellers, freely use the mirror cliche to convey physical description. I suppose they do this because it’s hard to convey physical description in a fresh, original way. I’ve tried various approaches to describing the main character in my series. Kate Gallaher is a television reporter, so I’ve used cameras, secondary characters, and her own anxiety about her looks to convey what she looks like. And yet people continue to ask, “What does Kate look like?” Their reactions to her appearance are like a Rorschach test for their own attitudes. Some readers can’t believe that a woman who is 25 pounds overweight can be attractive enough to lure men.  Others see her as a modern-day Venus.


What approaches do you use when describing characters in your stories. Do you have any other do’s and don’ts to add to my list? 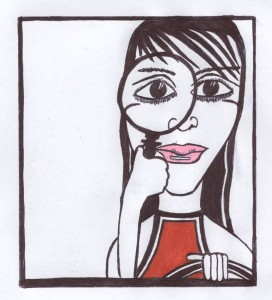 Many years ago I was taking a walk along the shore with a friend, and our girl talk went to DEFCON 1. (This is the most intense level of sharing between two women, where we swap secrets and confess anxieties. Any more intense, and we’d have to call in the Emo SWAT).

My friend confessed an affinity for a particular nightly cosmetic ritual–let’s call it extreme  pore cleansing. She went into rich detail about her technique, which she’d raised to the level of art. After about ten minutes, it was clear that her skin-cleansing habit had become an obsession.

I was a bit aghast at her description, but fascinated. Then I took a step back from the conversation and began to listen as a writer. This is what neurosis is, I thought. Later that day I jotted some notes into my character notebook, a journal I keep specifically for writing. The conversation with my friend (disguised, of course) became background for character description. I’d consult those notes if I ever wanted to describe someone whose face is shiny, red and taut around the edges, like someone who compulsively cleans their pores every night.


I’m always looking for these moments, the ones when my writer’s ear starts to listen. They’re ephemeral: if I don’t write them down immediately in my journal or on an index card I’ll forget them, like a dream you recall immediately after waking up, but which quickly fades from memory.

Do you keep a character notebook, or something similar? Do you have any moments of “writer’s ear” that you can share?