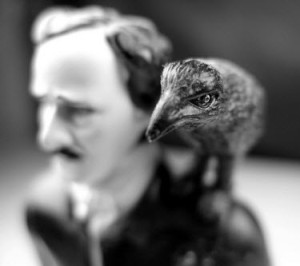 Today is the birthday of Edgar Allan Poe, who is one of my literary heroes. He would have been 201 years old (no spring raven), and is considered the inventor of the detective-fiction genre.

According to AP and other media reports this week, Poe’s descendants have decided that the author’s official “home” city will continue to be Baltimore, where Poe died in 1849. Other cities that were competing for the title of Poe’s hometown include Boston, where Poe was born in 1809, and London, where Poe lived as a youth. While living in London, Poe was reportedly inspired by the ravens at the Tower of London.

We tend to think of Poe as cadaverous and depressed-looking, based on daguerreotypes of the author. But a new  watercolor image of Poe unveiled this week shows the author as a vibrant–even happy-looking–young man.

Oh, and not to bury the lead, but Joe reminded me that MWA has just announced its list of Edgar nominees for 2010. Good luck to all!

On a sad note, the mysterious visitor who has been delivering roses and cognac to Poe’s grave on his birthday for 60 years, failed to appear this year. We hope this doesn’t mean that any ill fate befell the mystery visitor.

My favorite story by Poe remains  The Tell-Tale Heart, which was inspired by a superstition known as the Evil Eye. The plot was based on a true crime that took place during Poe’s lifetime. This story was the first one that introduced me to the concept of an unreliable narrator–you don’t know whether he is insane, or whether supernatural forces are actually at work. This type of narrator is still my favorite in paranormal stories (I don’t have much use for in-your-face paranormal characters: werewolves and vampires, oh my!)

What’s your favorite work by Poe?