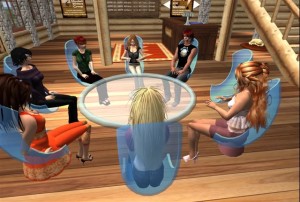 So the last stop on my book tour for BONEYARD was a virtual one in Second Life. I was a little trepidatious. I’m not exactly a Luddite, but when forced to deal with computer tech support people I find myself saying “Which thingy was I supposed to click on again?” with alarming frequency. And they assume the tone one takes when explaining things to a very small, somewhat slow child. So the thought of navigating a virtual environment was nerve-wracking to say the least.

Apparently the good people at the writer’s enclave on Athena Isle have dealt with my kind before, since they sent multiple documents explaining the entire process step by step. I’m sure they thought the experience had therefore been idiot-proofed, but I was the idiot that proved them wrong.

I successfully downloaded the Second Life software, only to have it crash every time I tried to open it. By the tenth attempt I was ready to throw in the towel. One of my Second Life advisors suggested I try installing it on a different computer, since Vista was notoriously quirky. So I appropriated my husband’s Apple and presto: I was in.

Of course, figuring out where the heck I was, and how I was supposed to get to Athena Isle, was a different matter. I alit on some sort of “welcome” island, with lots of confusing signs everywhere. Remember that scene in the Matrix, where they pull Keanu Reeves out of the water and he can barely see? Kinda like that. I found a “sample” house, wandered inside and ended up chatting with another girl who was having the same issues that I was, in that a) she kept walking into walls, and b) she couldn’t figure out how to sit down. Or do anything else, really, aside from type.

I should back up a bit here to describe my avatar. Turns out t 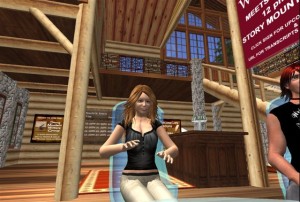 hat in Second Life it’s possible to buy yourself blue eyes, pink hair, and a complete outfit for the equivalent of two dollars This was extremely exciting, the only downside being that the only clothing retailers I could find apparently catered to streetwalkers. Seriously, the attire in Second Life is scanty at best. And even if you skew your avatar toward the “athletic” body type, she’s still going to be endowed with a Lara Croft-esque bust line. Not exactly my usual author look, but I decided to go with it.

After wandering around aimlessly for an embarrassing length of time, I discovered “teleporting.” Yes, teleporting, as in Star Trek. I’m one of those people who absolutely cannot wait for this technology to be available in my day to day life, along with that food machine that makes whatever you’re craving in a minute or less. I don’t care if teleporting means occasionally getting separated from a body part, as long as I no longer having to deal with the debacle that air travel has become. So far this was shaping up to be my kind of experience.

Unfortunately, regardless of which island I clicked on, every time I teleported I somehow ended up on the bottom of the ocean. Which forced me to circle the entire thing until I found a beach to climb on to. Seriously sad, I know. One of my gracious hosts finally sent me a link directly to the event location, and I ended up in what looked for all the world like a Tahoe cabin.

Another thing I want from Second Life is this magic table that my host, Alas, had. Every time a new person arrived, another chair appeared at the table (and a lot of the guests materialized in the air above the table, a very cool effect. Clearly they’d figured out how to avoid the whole deep-sea diving thing.)

The event itself went well, as far as I could tell. I’ve done online chats before. For some reason, it was actually more distracting being able to see other figures there while chatting. I suspect part of the reason was that as someone was typing a question, their hands moved as though they were at an imaginary keyboard. And the time lag felt a little more unnatural when I could see everyone else sitting there awaiting my responses. Plus it was fairly silent, aside from some simulated ambient noise. I’d compare it to a Quaker meeting, with Friends dressed like they dropped by en route to a rave.

However it was the first time I’ve fielded questions about getting an agent from a Faerie (at least I think that’s what she was, but I could be wrong.) I wandered around on my own afterward, visiting a few more islands. People kept trying to bite me, which I found somewhat disturbing, and they got offended when I refused (I think I missed the biting protocol sheet). I also discovered that I’m just as inept at small talk there as I am in my first life. Plus, I tried to change into a new outfit and ended up wearing the bag it came in. I did finally master flying, however, and that was very cool.

When I looked up, five hours had passed. Ouch. I reluctantly signed off and decided to steer clear for a few weeks while I got my life back in order post-tour. 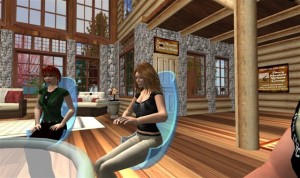 Honestly, if I had more free time on my hands, I could see quickly becoming hooked. The various environments you can visit there are so amazing, it really is a virtual Shangri-La. But I barely have time to get through my email every day as it is, and I’m constantly missing deadlines. I’ve already sworn off Scrabulous (temporarily—I mean, let’s be reasonable) and have begrudgingly acknowledged that the last thing I need in my life is another time-suck. And even at $2 an outfit, I could still probably do some damage to my bank account once I figured out how to wear what I purchased. So Second Life, I’ll be back for more someday. Just promise not to bite me.

Kicking things off today, I’m thrilled (no pun intended—sorry) to announce a SUPER DUPER BRAND NEW CONTEST. We’re holding a giveaway this week:
Comment on our posts from now through next Wednesday, and we here at The Kill Zone will toss your name in the hat for a $50 gas card. I know, that’ll buy you what, roughly 2 gallons? Hey, don’t blame us. We’re not the ones gouging, just a loveable group of writers trying to give your wallet a break…

And now, on to…BAD VILLAINS

We’ve all seen them. Those beady-eyed little guys wringing their hands as they chortle (ever notice that? Heroes never, ever chortle. The minute a character does that you just know he’s evil). They generally want to take over the world, but might be willing to settle for killing someone in a particularly terrible way. And they’d just love to tell you all about it first. One classic bad villain trait is that they live to hear themselves talk. In my humble opinion what made

the Austin Powers films so funny was the “Dr Evil,” character, who epitomized every bad villain cliché. (Remember the group therapy scene with his son? “My childhood was typical. Summers in Rangoon, luge lessons. In the spring we’d make meat helmets. If I was insolent, I was placed in a burlap bag and beaten with reeds. Pretty standard, really.”) Hannibal Lecter was scary, sure, but the ultimate villain has to be Dr. Evil. Who else could come up with an “evil petting zoo?”

For me at least, villains are the most difficult characters to create. The heroes and heroines, laughable/loveable sidekicks, and victims are easy, I could practically write those in my sleep (well, not really. But you know what I mean).

But a villain that comes off as frightening and not comical is a far different beast. It’s all too easy to slip into mwa-ha-ha mode. Worse yet is to have them engage in “monologue-ing,” explaining monotonously why they’re doing what they’re doing, and how they’ll get away with it (when of course, that discourse inevitably leads to their downfall).

rder still to avoid clichés. After all, since the beginning of recorded time nearly every story has featured a villain, from Medusa to Iago to Mr. Hyde. Joe’s post yesterday noted how many classic villains are fairly interchangeable. And that’s precisely the problem: how do you make your villain new and unique, not just another Hannibal-esque hybrid?

In my latest book, Boneyard, I had a particularly hard time. One of my villains came to life easily. I added some traits to him in successive drafts, but felt like I nailed him down without too much trouble.

And then there was the other guy. Man, he was a problem (serves me right for having two bad guys, I suppose). I had done voluminous research on serial killers in an attempt to make him as believable as possible, but kept encountering the same pitfalls. I felt at times like I was making villain soup, adding a pinch of Bundy and a dash of Dahmer, but he still seemed bland. Up until the final draft I cast him as a religious fanatic, quoting scripture to explain his motivation. But every time I r

ead over his dialogue I found myself squirming. It felt very forced and contrived, never a good thing.

Someone once said, “the villain is the hero of his own story.” It’s an important thing to remember. We’ve all known people who have been able to justify terrible acts to themselves. They did it for the greater good, or they didn’t have a choice. To me, those are believable villains.

So I slashed away with my red pen, leaving far more of his motivations to the reader’s imagination. In the end, I was happy with him. But with every book the problem must be freshly confronted. I’m wrestling with a different guy now, a real slimeball who’s motivated both by greed and hatred. Yet at the moment he’s more whiny than scary, not a good thing. And he keeps pulling at his handlebar moustache and asking about the rent, which is just annoying. Ah well. Hopefully I’ll get him by the line edits…

So, dear reader, what say you? Who’s your favorite “bad villain,” and why?

Remember: comment and your car might thank you for it later. Tune in next Thursday when I announce the winner and ponder why Second Life avatars only seem to come in one breast size.