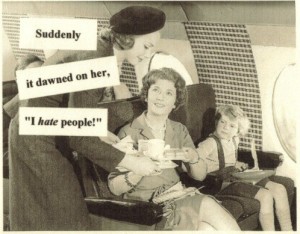 How I wish that air travel was like it used to be – glamorous, exotic, even adventurous. Now it is a grueling ordeal which, after the recent long haul flights to and from Australia, makes me wonder why I even bother to fly at all (probably because I have no choice).

Our flight to Sydney was actually good – we had two rows of four seats for us all risking that no one would, in their right mind, want the middle two seats in the final two rows in economy if they knew there was a three and a half year old sitting on the aisle. Our plan paid off and the boys got to stretch out, so we actually got a fair amount of sleep on the 15 hour flight over. But landing in Sydney in the middle of a thunderstorm,with each twin threatening to throw up and crying the eternity it took for us to land amid the lightning and rain, soon brought home the realization that flying is no fun at all.

Once on the ground we also had to wait on the tarmac as lightning prevented any of the ground crews from operating the jetways with the result being that four jumbo jets (at the very least) all deplaned (a word which I never thought existed) at the same time once the storm passed. Two hours getting through customs and immigration – and we’re bloody Australian citizens – meant that we missed our connection to Melbourne and could not get on another flight for four hours. Great, four hours in Sydney airport with three and a half year old twin boys after a 15 hour flight. The thing that got to me the most was that no one seemed to give a shit. Not at the airlines, not at customs. That’s what flying is all about now – endurance.

Can you put up with the power play of the customs guy who refuses to let you go in the shorter line because (and I quote) “Just because I said no” (bastard!) despite two little boys in tow.

Can you put up with the Qantas staff who shrug and say ‘oh well’ when you are faced with a four hour wait after a long flight mainly due to the fact that Qantas had originally cancelled your international connecting flight (without telling you) forcing you on to a domestic flight which meant clearing customs etc. in Sydney – which meant you were screwed.

On the return flight, there were no spare seats so the boys got to sprawl over us instead (I was in a mini Yoga session trying to contort my body so I could sleep amongst the toddler heads, feet and arms). Qantas flight staff appeared maybe three times the whole flight and couldn’t even be bothered handing out a kids activity pack (good thing I always have about 100 hours worth of entertainment packed into a backpack and miracle of miracles our in flight entertainment did work – the family behind us had none that worked!) I guess at least the return flight was smooth but still the food was lousy, the service (if you can even call it that) was indifferent and this was on an Australian airline – which used to be a safe haven – an expensive but welcome change to the American flying experience.
No more.

So much for jet-setting to glamour and fame.