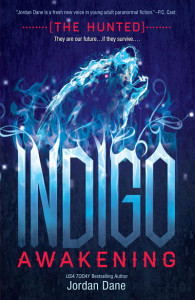 My young adult novel, Indigo Awakening, launched two days ago on December 18. It is the first book in the Hunted series with Harlequin Teen. The inspiration behind this book came from researching Indigo children. Query “Indigo Child” on the Internet and you’ll get over 8 million hits. Real life and headlines often inspire my books and this time is no exception. For the purposes of fiction, I took liberties in my portrayal, but Indigo kids are generally described as highly intelligent, gifted teen psychics with a bright “indigo” aura and a mission to save the world. They have high IQs, see angels and commune with the dead. Are Indigo children real or are they manipulated by adults to believe they’re special? Are they dysfunctional misfits or mankind’s evolutionary savior? You decide, but I find the notion of man’s evolution intriguing. Here is the synopsis:

Because of what you are, the Believers will hunt you down.

Voices told Lucas Darby to run. Voices no one else can hear. He’s warned his sister not to look for him, but Rayne refuses to let her troubled brother vanish on the streets of LA. In her desperate search, she meets Gabriel Stewart, a runaway with mysterious powers and far too many secrets. Rayne can’t explain her crazy need to trust the strange yet compelling boy—to touch him—to protect him even though he scares her.

A fanatical church secretly hunts psychic kids—gifted “Indigo” teens feared to be the next evolution of mankind—for reasons only “the Believers” know. Now Rayne’s only hope is Gabe, who is haunted by an awakening power—a force darker than either of them imagine—that could doom them all.

They are our future—if they survive…

1.) I triggered my premise with a “What If…” question that had conflict – The most important question in a writer’s arsenal is “what if.” What if Indigo kids are the next evolution and their psychic abilities are evolving and escalating? Who would fear this and feel threatened? I had to have a larger than life villain with a universal reach to terrorize these children. (Yeah, that’s how authors think.)

2.) I created conflict through a powerful enemy – The Church of Spiritual Freedom (specifically, a covert operation of overzealous “Believers”) use their faith as justification to persecute those they fear, believing God is on their side. They fear that Indigos and Crystal children threaten humanity’s existence with their “unnatural” superiority. That’s the basic conflict, a David versus Goliath storyline with an abundance of potentially evocative themes.

3.) I did research to add depth and dimension –I blended my research on Indigo kids with the topic of psychic abilities to create a different kind of world that wouldn’t be formulaic. I wanted the reader to “feel” these powers and how they erupt or evolve within each character. I didn’t want to simply describe traditional psychic capabilities. I wanted readers to understand how these kids feel as their power explodes or how their gifts morph into something far greater after they make contact with the “hive mind.”

4.) I provided a cultural context and hierarchy to my world that added to internal conflict for my characters – There is a hierarchy of Indigo Children/Indigo Warriors/Crystal Child. I made Indigo kids the base level with the status of a Crystal child more unique, powerful, and elite. Indigos are highly intelligent intuitive teens who “feel” their way through life, trust their instincts above all else, and can often see angels and the dead. Some Indigos are warriors with a fierce fighting spirit and a rebellious nature. This difference fuels future conflict between the cultures as Crystal children tend to be more peace loving and innocent. They are our future, if they survive, but what kind of world will they build?

5.) I built in consequences for wielding power – There is a dark side to having these powers—a duty and responsibility—and when the Believers tamper with science and human nature, they battle something they should have respected more. In book #2, Crystal Storm, There are consequences on both sides when power (of any kind) becomes abusive.

1.) If you could have a secret Indigo power, what would that be?

2.) Have you ever experienced a psychic moment or do you know anyone who you think is a real psychic?

“Dane’s first offering in her new series, The Hunted, is sensational. Indigo Awakening has strong characters and a wild and intense story, matched only by the emotions it will generate within you. Readers will love this book and eagerly await the next adventure. Fantastic! A keeper.”
~Romantic Times Book Review Magazine – 4.5 Stars (out of 5)