Skip to primary content
Skip to secondary content
James Scott Bell
Twitter.com/jamesscottbell
You have to evolve a permanent set of values to serve as motivation. – Leon Uris
This week I’ll be leaving for Houston to teach alongside the mythic structure guru, Christopher Vogler, and the breakout novel sage, Donald Maass. Three intensive days with a room full of writers, talking about what we all love–the craft of fiction.
So it seems apt for this post to riff on a question that Mr. Maass poses at the end of his book, The Fire in Fiction.Maass wants to know what you have invested in your story, where the blood flow is. He asks, “What the hell do you want to say to me?”
Which brings us to the subject of theme, or premise. It’s the part of the writing craft a lot of writers seem to struggle with.
I’ve been reading some resources of late on the subject. Some suggest that you must know your theme up front, or your manuscript will wander. Yet many successful authors say they concentrate on the story itself and “find” the theme as they go along.
Either approach will work as long as you let the theme arise organically out of a plot that shows a character with a high stakes objective, opposed by a stronger force.
For example, in the film The Fugitive you have an innocent man on the run from the law, trying to find the man who murdered his wife. He’s got an opposing force in the U.S. Marshal’s office (embodied by Sam Gerard, super lawman). Forced to keep ahead of the law, Dr. Richard Kimble finds resources within himself he never knew existed, and eventually proves his innocence while nailing the bad guy. 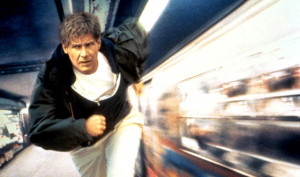 So what is the theme, or premise, of The Fugitive? You could state it in several ways:
– Dogged determination leads to justice
– A good man will ultimately prevail over evil
– Fighting for what’s right, even against the law, leads to the truth
As a writer, you probably have a sense of what your theme is simply by knowing how your character will come out at the end. And you definitely should know at least that much.
For example, when I wrote Try Dying I knew my lawyer protagonist would find out who killed his fiancé, the one true love of his life, and in doing so prevail over the bad guys. In my head, then, I was thinking something along the lines of True love will pursue justice for the slain lover, and win.
That’s what the hell I was trying to say. And I believed it passionately, which is the key to a premise that works. The reader has to believe you believe it.
At some point in your writing –– before you begin or soon after you get going –– ask the following questions:
1.  At the end, what is the condition of your Lead character? Has he won or lost?
2. What is the “take away” from that condition? What will the reader think you are saying about life?
3. Most important: Do you believe it passionately?If not, why are you writing it?
Here’s an example. In Casablanca, what is Rick’s condition at the end of the movie? He has found a reason to stop his self destructive behavior (drunkenness) and his isolation (because of perceived betrayal). He’s found the inspiration he needs to go back into the world and rejoin the fight for freedom against the Nazis.
What’s the take away? True love will sacrifice for a greater good, and restore a person to a life worth living. 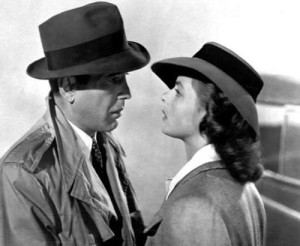 Rick sacrifices his true love, Ilsa, because she is married to another man and that man is essential to the war effort. Rick knows that if he and Ilsa go off together she’ll regret it (“Maybe not today, maybe not tomorrow, but soon, and for the rest of your life.”)
Coming as it did during the early years of World War II, it’s clear the filmmakers believed this passionately, because that sort of sacrifice for a greater good is what the government was calling upon its citizens to do.
So use those three power questions to find a premise worth writing about.
How about you? Do you consciously identify the themes in your stories? Do you discover them as you go along? Or do you just let it happen as the characters determine?
I’d love to hear your thoughts on this in detail, as I am currently working on a chapter on theme for a new collection. Let’s have a conversation.