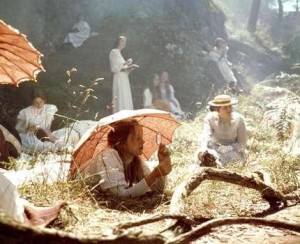 As I’m in Australia at the moment, visiting relatives and friends, I thought it was about time I discussed some home-grown Aussie mystery. If you’re thinking I’m sunning myself on the beach somewhere you’d be wrong – Melbourne is in the depths of winter so think rain and lots of it! Since I’m in the cultural capital of Australia (sucks to Sydney – you can see where my allegiances lie!) I have to talk about one of my all time favorite mysteries – Picnic at Hanging Rock.

I read the book by Joan Lindsay when I was about twelve and I was convinced it was based on a true story – the eerie mystery surrounding the fate of a party of schoolgirls who visit Hanging Rock was deliciously fraught. Then along came Peter Weir’s film and the whole ambience and sexually charged atmosphere came to the fore. There are even hints that the events in the book may have been based on events in Joan Lindsay’s own life but there has never been any record found of anything similar happening. Yet the mystery endures today, probably because it remains unsolved (although there is a missing final chapter which Lindsay wrote that apparently solves the mystery. It was excluded in the original book and, to be honest, I don’t want to even know what it says).

I’ve visited hanging rock (Mt. Diogenes) and each time I was struck by the strange energy of the place. It is located just outside Melbourne, where I grew up, and is now forever associated with those haunting few words :
“On St. Valentine’s Day in 1900 a party of schoolgirls went on a picnic to Hanging Rock. Some were never to return…” 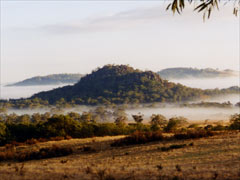 The place itself was the most important character in the book as well as the movie. What places have inspired the same fear within you?