I hadn’t been paying much attention to the Jimmy Savile pedophile scandal–after all, living on this side of the pond, I had no idea who he was. It was just another of those stories that popped up on Twitter occasionally–I was vaguely aware that a deceased former BBC star had been accused of child abuse, years after the incidents took place. But that was about all I knew.

Until one afternoon, I followed a link and read an interview with an alleged former victim. While discussing the abuse she suffered, the woman said, “You have to understand, this happened in the 80s. It was a different time.”

A small part of me instantly bridled at that–after all, I came of age in the 80s, and it was hardly the horse and buggy era. We were well aware that the world wasn’t always a safe place for children. When Adam Walsh was murdered, the entire nation was riveted- and I received a stern lecture from my parents on stranger danger. When a flasher propositioned two girls at my bus stop, the entire East Greenwich police department staked it out for over a week.

But then I remembered my 8th grade English teacher, Mr. X. I won‘t use his real name, because although he’s most likely retired by now, he’s probably still alive and well. Mr. X was one of the more popular teachers in school- he was charismatic and funny.

And, in retrospect, clearly a pedophile.

His M.O. involved choosing one boy in class–my year, it was a sweet kid named Chris. Chris was one of the only kids I knew at the time whose parents were divorced–in Rhode Island, that was still a rarity. Chris lived with his mother, who just happened to be in a community drama group with Mr. X.

It started with Mr. X making inappropriate remarks about Chris’s mother–discussing how sexy she’d looked at rehearsal the night before, or how he couldn’t wait to “stick his tongue down her throat” onstage. We all found this hilarious, to our great discredit. (Chris, although those comments clearly made him uncomfortable, always did his best to laugh along with the rest of the class).

This behavior escalated. Poor Chris would be openly mocked in front of the class. Mr. X would challenge his manhood, usually by mimicking him in a squeaky voice. And if Chris protested, he would take him over his knee and spank him, or make him sit on his lap. And this all transpired in full view of twenty-nine other kids, in the middle of what was supposed to be a safe environment for us- school.

Looking back, I’m utterly mortified that none of us found this behavior odd. We all thought of it as a delightful, entertaining part of Mr. X’s teaching style. And I doubt that Chris ever told his mother what was going on–we were at that age where when your parents asked how school was, you said, “fine,” and went to your room.

Last year, I discovered that a fellow crime writer had grown up in my hometown and attended the same school- including Mr. X’s class, a decade after me. And apparently, ten years later, Mr. X was still up to his old tricks: honing in on one boy and treating him in an entirely inappropriate manner. 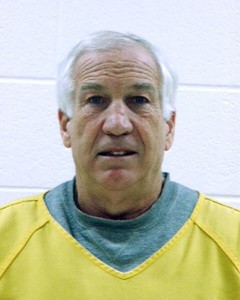 As more stories emerge from the Savile scandal, not to mention the horror stories about Jerry Sandusky and the Penn State football program, I’m forced to acknowledge that the 1980s weren’t the enlightened era I thought they were. The awareness of what constitutes sexual abuse was far less clear back then than it is today. I like to think that my daughter will never have to experience anything akin to what Chris suffered in Mr. X’s class– but that if she ever did something like that, she’d know to speak up about it.