I used to say this: It’s not a lie if somebody isn’t owed the truth. I don’t say that anymore. – One More Lie
I am pleased to announce the publication of my new suspense collection, ONE MORE LIE. It’s available on Kindle, Nookand Smashwords.  You can view the trailer here.
This collection includes the title novella and three new stories. I thought it might be instructive to tell you how I went from idea to story for the novella.
There are various creative exercises I use to come up with story possibilities. One of my favorites is the first line game. You make up a bunch of intriguing first lines all at once and see where they lead. I learned this from Dean Koontz in his classic HOW TO WRITE BESTSELLING FICTION. Koontz himself once wrote the line: “You ever killed anything?” Roy asked. He didn’t know anything else, but the line grabbed him and eventually he turned it into the hit novel The Voice of the Night.
For ONE MORE LIE, I actually got a first chapteridea. So I wrote it. I liked it so much I put it in my “active file” to noodle on later.
It stayed there for about a year as I worked on other projects, primarily those for which I had been paid, the publishers having the perfectly quaint notion that I therefore owed them a book.
But every now and again I’d return to that opening and think about it.
The day came when I had a window of time and decided to give it a whirl. So what I did was this:
1. Fleshed out the main characters. In this case there were four, and I spent time coming up with relationships and backstory. That in turn suggested further plot developments. I call this “orchestration” and it’s one of the most important things a writer can do with a new idea.
2. I experimented with POV. I had originally written the opening in 3d person. Sometimes I’ll switch POV to see how it feels. In this case, I decided that First Person was a better fit. My previous novella, WATCH YOUR BACK, was written in that sort of James M. Cain style I like, so I went with the same for ONE MORE LIE.
3. I let the plot unfold as I wrote, but took notes and outlined as I went. This is a “rolling outline” that enables you to think ahead during the writing process itself. It allows a certain freedom in plot while at the same time you’re building a solid structure. One benefit is that a particular twist happened out of the blue that completely changed the direction of the story and gave it the deeper dimension I was looking for.
4. I completed a first draft, let it sit, then printed it out in hard copy for my first read through. I take minimal notes at this stage, wanting to have a “reading experience” first. Then I assessed the big picture and revised it.
5. I gave it to my beta readers, starting with my lovely wife, who has a great editorial eye. I got terrific notes back. One of the readers did the copy edit for me.
6. I prepared it for e-publication, sent it out to be formatted. My son wanted to take a stab at designing the cover, and who was I to argue? The price was right. As in zip. 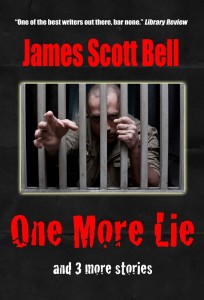 7. My son, a film grad, also did the trailer. For that I bought him dinner.
The result is a novella that got this advance copy blurb from Ane Mulligan of Novel Rocket: “James Scott Bell is at his best in One More Lie. Fast paced, this novella will leave you breathless to the unforeseen end. Once I started reading, I couldn’t put it down. Novel Rocket and I give it our highest recommendation. It’s a must read!”
And I still love that first chapter. So I’ve put it up online and invite you to read it. If you feel compelled to read on (and I think you will be) then for $2.99 you can get the whole thing, plus three other stories to boot. No contests. No gimmicks. Just bang for your reading buck. That’s what I’m going for every time out.
Now I want to know about YOU. How do you like to generate and nourish ideas? When do you know you’re ready to take one to the max and write?