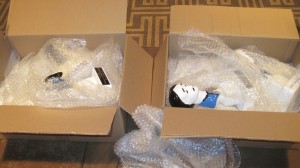 So I am doing my usual warm-up before hitting the computer yesterday morning: folding laundry and watching “Frazier” reruns. I love Frazier because beneath his smooth surface is a roiling bog of neediness and insecurity.

Yesterday was the episode where Frazier and his producer Roz are nominated for the Seebee Award, given out to Seattle’s best broadcasters. Frazier tries to be above it all, but he just can’t. He wants to win, dammit! But at the banquet, he finds out he is up against the aging icon Fletcher Grey. Fletcher has been nominated 11 times in a row and lost 10. Fletcher’s date is his 84-year-old mother who has flown in from Scottsdale — for the 11th straight year. Fletcher is also retiring. Frazier tells Roz, “if we win, they’ll string us up.” Roz says, “I don’t care. I’d crawl over his mother to win this award!”

Frazier loses, of course. His agent Beebee deserts him. Roz gets drunk on Pink Ladies. 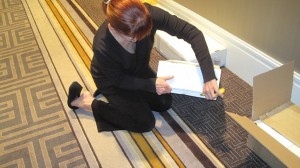 Sounds like a couple award banquets I’ve been to. A couple I have chaired, in fact. My sister Kelly and I are the chairs of the Edgar Banquet. (That’s me in the photo above unpacking Edgar programs in the Grand Hyatt ballroom. I also do windows). We’ve been doing this chairman gig for about five years now. It’s a lot of work and a lot of fun. You get to meet a lot of nervous but sweet debut authors, a few movie stars (I did an embarrassing fan-stalk of Richard “Munch” Belzer one year) and some really classy dames. (That’s Kelly and me below with Mary Higgins Clark.) 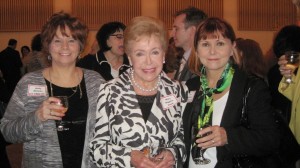 We also been judges for the Shamus Awards, the Mystery Writer of America St. Martin’s Best First Novel contest, and  the International Thriller Awards. So we’ve seen how the sausage is made.

The stories I could tell…

But I won’t. And not just because sometimes they make judges sign confidentiality agreements. Mainly it’s because ours is a very small community and I believe in author Karma. If you make a fool of yourself in public, it will come around and bite you on the butt. You can put good money on that.

Also, I’ve been on the other side of the whole awards thing. We’ve been lucky enough to be nominated for some awards over the past twelve years. Yes, it is an honor to be nominated. But it bites to lose. I can’t lie and tell you otherwise. Our second book “Dead of Winter” was nominated for an Edgar. We were wide-eyed newbies in those days — didn’t even know what Mystery Writers of America was — and we went to New York with our new gowns, got our nails done and gathered with spouses, son, and agent in the Grand Hyatt bar before the banquet to calm our nerves. Not a drop of alcohol because if we DID win, we didn’t want to go up on stage three sheets to the wind and say something stupid. (As I said, I now have stories I could tell…)

Well, when our name wasn’t announced, we all grabbed for the wine bottle in the middle of the table. The rest of the night is a blur. So is the rest of the decade, as far as awards go. Because as I said, although we got nominated for a couple, we never won. Which brings me to July 2008.

Our book “An Unquiet Grave” was nominated for the International Thriller Writers Award. Back to New York City we went, back to the Grand Hyatt. No expectations this time. My sister couldn’t make it so I sat between my husband and Ali Karem. My friend the late Elaine Flinn kept saying it was our night. Doug Lyle wished me luck. Without Kelly at my side, I sat there feeling alone and sort of empty. We might write hardboiled, but I am not. Finally, I couldn’t take it anymore. I bolted for the lobby.

Jim Fusilli was standing there and barred my way, putting an arm around my shoulders. Each nominee was announced by reading the first line of their book. Ours is “The Christmas lights were already up.” I remember thinking, “God, that sucks.”

I heard the title of our book announced as the winner. I started crying. I don’t remember what I said on stage. Many authors, when they are up for awards, have the sense of jot down a few notes beforehand so they are gracious, and  their clever speeches are quoted in the blogs the next morning.

This is what SHOULD have been in my head as I went up there:

“Thank you so much for this great honor. First, I want to thank the ITW judges who put their careers on hold for months. Their job is doubly hard in that they first must read hundreds of books but then, they must decide on just one when any of the five finalists would be worthy. Second, I want to thank my fellow nominees. I am honored to have my book mentioned among their fine works. Third, I want to thank my agent and editor who….”

This is what was REALLY in my head:

“God, I can’t believe I am crying! How pathetic and needy! Where’s the friggin’ stairs? I can’t see! Who is that man at the podium? Shit, I forget his name! THE LIGHTS! I CAN’T SEE ANYTHING! Do I have lettuce on my teeth? My bra is showing, I just know it. DON’T PULL AT YOUR BRA!! He’s handing it to me. Jesus, it’s heavy…don’t drop it…don’t drop it…don’t drop it. Say something nice about the other nominees! Can’t…can’t…can’t remember their names. YOU TWIT! You just sat on a panel with TWO of them this morning! Wait, wait…is it Paul LeVEEN or Paul LeVINE??? Forget it…buy him a drink later. I should have gone to the hairdresser before I left home. My roots are showing. Shit, did I thank my agent? JESUS! THE LIGHTS! Stop talking now…you’re rambling, you ass…stop now and just go sit down. Okay, leaving now. TAKE THE AWARD! Don’t drop it…don’t drop it…don’t drop it. Good grief…I’m here in New York City wearing Nine West because I was too cheap to spring for those black Blahniks at Off Fifth. Dear God, just let me just off this stage so I can get to the john and pull up my Spanx and get a glass of wine…”

Well, we’re entering award season soon. So here’s a few reminders. Entries are due for ITW’s International Thriller Awards. CLICK HERE for the link. There is also time to still enter the Edgars and you, the author, can do it yourself if you wish. CLICK HERE.

A few more final reminders about this awards thing from an old veteran:

If you don’t get nominated, don’t go to Amazon, read the samples and obsess about what hacks the writers are or whine that nobody has HEARD of these books and the judges don’t appreciate commercial fiction.

If you never get nominated for anything in your life, remember that many great and successful authors haven’t either. Vonnegut lost the Nebuba Best Novel award. Nabokov whiffed on seven National Book Awards AND lost the Nobel to some guy named Eyvind Johnson. And do you think guys like Lee Child go to sleep at night worrying about not winning an Edgar?

If you DO get nominated, have the sense to write out a little speech and try not to use it to give the finger to everyone who has slighted you in the past. (I told you…I have stories I can tell.)

If you lose, don’t get drunk, sling a woman over your shoulder and drag her into the the hotel elevator (Yeah, I saw that one too).

If you win, be thankful and gracious then get right back to writing.

Winning an award is nice but it won’t get the laundry folded.