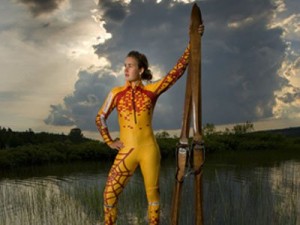 Like many other writers, I’ve set up a Google alert based on my name. Generally this lets me know when a review of one of my books has posted, or when they’re being sold on ebay (the latter more than the former, sadly). However, due to an error on my part when I was establishing the account, it turns out that I receive news pertaining not just to me, but to pretty much every Gagnon in the English- and French-speaking world.

I was going to adjust it, but some of the tidbits trickling in were so interesting I decided to stick with the original search parameters. After all, I’m probably related to all of these people somewhere down the line. One of my aunts did a full family tree awhile back, and apparently nearly every Gagnon in North America is descended from one of three brothers who immigrated from Normandy to Canada back in the 1600’s. I even have a list of what they brought over on the boat with them- the most interesting item being a jar of worms, since they weren’t certain there would be any in the New World and, as farmers, this was a matter of great concern to them.

What I’ve learned: Gagnons tend to do well in school. Nearly every day I get a post about someone making the honor roll. Sadly, they also have an unfortunate predilection for a life in crime, although apparently they’re not very good at it, since according to local crime blotters the overwhelming majority of them get caught. I wonder what kind of trajectory that indicates. How does Matt Gagnon go from the Dean’s list to knocking over pharmacies? It’s a conundrum.

One name tends to pop up more than the others, however, especially this week. Marie-Michele 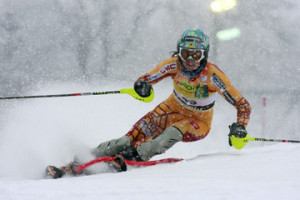 Gagnon is an alpine skiier from Quebec (where those farmers initially set up homesteads-apparently in some parts of Quebec, “Gagnon” is as common a name as “Smith” in the US.) This year, the twenty year-old made the Canadian Olympic team, and will be representing them (and us) in Vancouver.

I confess to experiencing a swell of pride when that news came over the wire. I’ve been inadvertently tracking Marie-Michele’s career for some time now. She started popping up regularly as a finalist (and occasional winner) of downhill events. Since our names are so similar, it piqued my interest even though I’ve never been much of a skiing fan in the past (this is largely thanks to an unfortunate experience the first time I hit the slopes, when my best friend at the time took me down a black diamond as a joke. It turned out that it wasn’t very funny, and I haven’t been on skis since).

I was beyond thrilled to learn that Marie-Michele won the Nor-Am overall title for 2008-09 season–although I ‘m not entirely certain what that means, it certainly sounds like she’s doing well. And it’s reassuring to know that although I clearly didn’t get the skiing gene, at least one of my distant relatives did. Maybe I’m descended from the wrong brother.

Marie-Michele will be participating in the Ladies’ Slalom and the Ladies’ Giant Slalom next week. I’m feeling quite nervous for her. Come prime time, I’ll be sitting in front of the television, clutching my honorary jar of worms, fervently hoping that she doesn’t experience one of those terrible wipeouts that seem to occur regularly in these events. I hope you’ll join me in wishing Marie-Michele the best–after all, she’s a tribute to Gagnons everywhere. And if this doesn’t work out for her, I sincerely hope she resists the temptation to turn to the dark side.

I’m tagging her in this post, because who knows- maybe she’s been inadvertently tracking me as well.